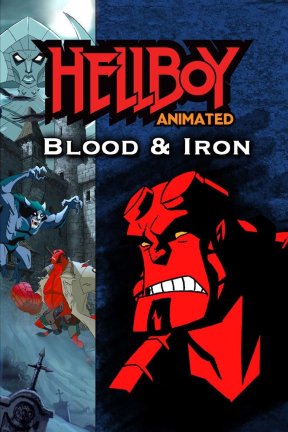 This time, along with Perlman, Blair and Jones, John Hurt reprises his role as Professor Trevor ‘Broom’ Bruttenholm.  Borrowing from the legend of Elizabeth Bathory, Blood and Iron is a tale that spans two times. The early life of Broom dealing with a vampire queen and the present with the BPRD investigating a haunted castle in the same town.

As usual, there is a demonic goddess who is driving things, and she tries to tempt Hellboy to turn his back on humanity, while the vampire queen seeks revenge on Broom for a confrontation that had occurred decades earlier.

Unlike Sword of Storms, the team gets to interact more throughout the movie, which is an improvement.  We also get action hero Abe Sapien, jumping around and firing guns. While vampires and werewolves are not quite as inspired of monsters as the Japanese folklore of Sword of Storms, but the story makes up with this, including a snake goddess and two odd witches.

The animation of both films look better than the initial stills I had seen.  And the character designs seem even a bit stronger in this film.

I am not sure exactly where these films are supposed to fall.  Are they outside of Del Toro’s films? Are they part of that universe?  The fun notion of using the live action actors has a lot to do with the uncertainty I have.  But wither way, the Hellboy Animated films are pretty fun.