Parasite opens with a family struggling to find access to someone’s wi-fi so they can use their phones. Comical and relatable it is also clear the Kim Family are constantly trying to find ways to make money and cut costs.

When a friend of son Ki-Woo asks him to take over a job tutoring a girl from a rich family for him while he is away at college, the Kim family gets an idea.  They plot to infiltrate the family via employment.  They find ways to get the current employees of the rich Park family fired and take their places.

Parasite is one of the more clever and nuanced looks at class and really the entire system of capitalism.  Bong Joon Ho weaves a tale without heroes. Instead, we follow the families and see how different the worlds they live in are and yet how interdependent those worlds really become. It is not a critique of the rich.  The rich in the film are not direct evil. We Americans tend to be more comfortable with clearly delineated good and evil.  But Parasite looks at the economic system of capitalism and suggests it makes us all parasites.

The cast is terrific, with all great performances.  The writing is wickedly funny and emotionally charged. Parasite earned it’s Oscars and is a film I highly recommend. 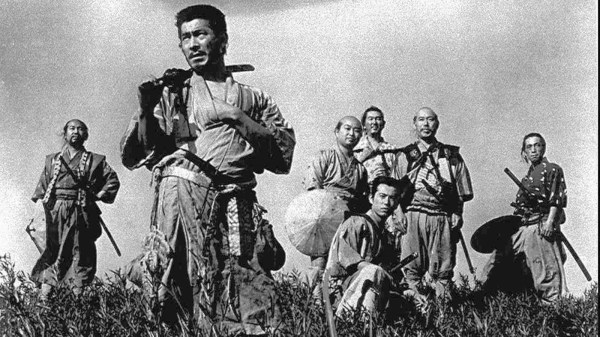 Being set in sixteenth century Japan, some might question including this film in my series on westerns.  But having run through the Magnificent Seven films, not looking at the film that inspired them, that created one of the most memorable western motifs seemed downright criminal.

A small mountain village is being raided by bandits and after they leave, the town sends out a party to find help.

They find Kambei, an older Ronin and watch him save a baby from a thief. While he is not initially interested in helping them, he relents and assembles six more Samurai to both teach the villagers and help them defend the village.

Kurosawa had apparently planned to make a film about a “day in the life of a Samurai” before research brought him to a story about Samurai helping farmers. And thank goodness for that.  Because Seven Samurai is a pleasure to watch.  It is humorous, exciting and touching.

Clocking in at three hours, we get to know the Samurai very well.  We see their friendships (both with themselves and the villagers) grow.  A beautifully shot film, Seven Samurai is a masterpiece that has and will continue to influence cinema.