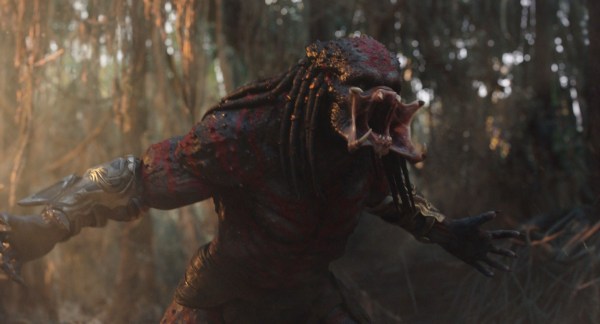 Shane Black, writer and director of the terrific films Kiss Kiss Bang Bang and the Nice Guys returns to the franchise he was part of at the very beginning. Black played Hawkins…who told terrible jokes to Sonny Landham’s Billy that he constantly had to explain and Billy only finds funny once.

Predators did not reignite the franchise, and so eight years later we have an attempt to reboot the series.  This film is firmly set in the continuity of the films Predator and Predator 2, with references and imagery to them, but not in a way that would be confusing to someone going in blind. It never acknowledges the third film, but it makes sense that nobody is aware of those events as they took place on another planet.

The film opens on Quinn McKenna, a military sniper with PTSD. He is on a mission when he comes into contact with a predator. The military tries to silence him by sending him to a military psychiatric hospital. There he meets a group of troubled soldiers. Meanwhile Dr. Casey Brackett is brought in to help study a captured Predator. She wants to speak with Quinn, so the prison bus is routed and they arrive as the Predator is breaking out and…well, okay…so the film is a bit all over the place in the beginning.

By this, I mean they introduce a ton of characters and that means it takes awhile to get to the meat.  But when all the threads come together, the film begins to pick up.  The finale is crazily packed with action and violence.

I like Black’s attempt to deal with human situations like Autism and mental illness.  Admittedly, at times the conditions of the soldiers can feel a bit more like they are jokes, but I still found myself liking the characters enough that when the carnage starts, I wanted them all to make it out alive.

The film has a pretty solid cast. I always like to see Thomas Jane pop up and Olivia Munn gets to be pretty badass and have more character than her role as Psylocke a couple years back in X-Men: Apocalypse.

The Predator tries to give the Predators a larger goal than simply hunting people, and it is not terrible. It is good enough to work anyways. While it is a bit slow on the start, it eventually becomes a fun action sci-fi movie.

It is too bad that the film is mired in a controversy that was brought about by Shane Black. He skipped over traditional casting and gave his friend a small role hitting on Munn. What nobody, including Munn, knew was that he was a convicted sex offender.  He had attempted to “entice” (legal term) his 14 year old cousin into a sexual relationship. Black knew his friend was an offender. Munn petitioned the studio to cut the scene, which they did. Munn faced little support in the beginning (with Black and the rest of the cast backing out of a press junkett, leaving Munn to be interviewed alone).

The cast has, since stepped up and Black apparently had been unaware of the seriousness of his friend’s situation and has apologized. He has said he is working with Munn privately to try and repair the damage.  Considering the film clearly left open for a sequel, I would like to see Olivia Munn return. Black really dropped the ball with his actions, as he did not at least make cast mates aware.

That said, I still really did enjoy the film, and in spite of flaws, it is certainly an entertaining entry to the franchise.

The Mission Impossible franchise is kind of…well, a weird one. I thought the first one was okay…but the second film was a mess. J.J. Abrams streamlined things a bit and made an improvement with the third film.  Brad Bird and Christopher McQuarrie directed the fourth and fifth installments…and these turned out to be the most entertaining films of the franchise.  With the sixth film, Fallout, McQuarrie is the first director to return to the franchise.

The actions of the previous film have had an impact on the world terrorism scene. Ethan, Luthor and Benji lost weapons grade plutonium on a mission, and their attempt at cleanup ends up being overseen by the CIA who assign their top agent and assassin Walker to join the IMF. Angela Bassett’s Erika Sloane states that the IMF is like a scalpel, but she prefers a hammer.

Full of twists and turns, McQuarrie keeps the action going and strives to avoid being to predictable, though some of the tropes of the franchise seem unavoidable. Nobody stops the  secret weapon five minutes before the countdown will end…because where is the drama in that?

Cruise does not show any signs of quitting, and he manages to keep up a convincing performance as an action hero within the franchise. Hunt is portrayed as the guy who has the small picture in mind allowing his higher ups focus on the bigger picture.  Two different characters inform Ethan that he pretty much cares about the individual lives so they don’t have to.

Cruise, Rhames and Pegg have good comedic chemistry and play well together as a team.  He and Rebecca Ferguson have a good tension, but thankfully, Ilsa continues to have an agency beyond a potential love interest.  The film manages to make every character feel pretty important, and saving the day falls on all of their shoulders.

I really enjoyed the film…but here is my one caveat regarding the Mission:Impossible Franchise. I have enjoyed the films…but find them hard to remember. I remember I liked them.  I just do not really remember much about them later. I wonder if Fallout will continue this trend.