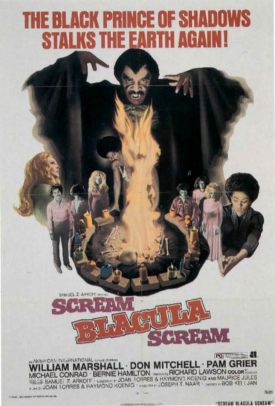 Blacula was a straight forward vampire film. And it spawned a sequel.  Because if Dracula can keep coming back, why can’t Blacula??!!

In this film, the embittered son of a voodoo priestess seeks revenge against the Voodoo Community names another member as her successor.  He raises Blacula from the dead, who swiftly turns him into a vampire. Again they start to build a vampire army.

A police Detective, Justin Carter is trying to solve the case of mysterious deaths, which lead him to Lisa. Lisa is the woman chosen by the Voodoo Community and a former lover of Carter’s.  Blacula comes to desire Lisa and also believes she may be able to cure his vampirism through voodoo.

The film has some weird points, such as the bizarrely Nice Racist trope in the sheriff. He does not hate Justin, but he is dismissive of him at times.

While the film is not quite as good as Blacula, it does have some great moments.  And both Marshall and Pam Grier turn in great performances. There is one scene between Blacula and Carter where there is a cat and mouse dance. It is an effectively tense scene.

It is kind of interesting to note that this came out the same year as Ganja & Hess.  They approach the vampire myth from very different perspectives. Ganja & Hess is a deep dive into addiction and is largely an arthouse horror film.  Scream, Blacula, Scream is a very standard sequel that is about quick scares and blood.

Really, though, Scream, Blacula, Scream manages to be a pretty entertaining follow up to the first film.