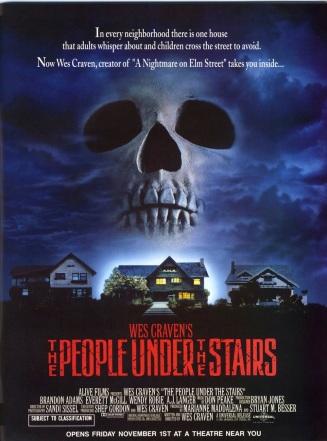 In 1988 Wes Craven explored Voodoo, but it was through the eyes of a white man in Haiti.  With the People Under the Stairs,  Craven looks at the plight of under privileged communities and the underlying causes of crime (poverty).

There are rumors of a creepy house that hides a fortune. Leroy wants to get into the house in the hopes it is true and recruit’s his girlfriend’s younger brother Fool. But when they break into the house, they discover that it is booby trapped. Once trapped inside, Fool has to dodge the disturbed couple who live in the house.

Fool discovers a teen girl locked in the house, a victim of abuse…he also discovers there is something in the walls…something dangerous.

I feel like this is an under-rated film from the Wes Craven catalog.  It is creepy to the point of uncomfortable.  The couple, simply named Man and Woman appear to be bondage loving racists (saying more is revealing too much). Fool is a fun character, he begins as a pawn for a crime and becomes a hero.  Craven’s choice to focus on a young black boy is pretty bold.

I really like the film, Fool is a character that is pretty easy to root for and when he teams with Alice (the teen girl) it makes for some good old fashioned comeuppance for the bad guys.  I do wish this one got more respect, and think it is one of Craven’s more interesting films.