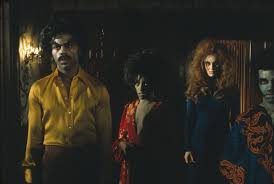 Blacula was a straight forward vampire film. And it spawned a sequel.  Because if Dracula can keep coming back, why can’t Blacula??!! In this film, the embittered son of a voodoo priestess seeks revenge against the Voodoo Community names another member as her successor….

In the future, the terraforming of Mars has begun  There are colonies all over Mars.  The world is now a Matriarchy.  A police force is sent to Mars to transfer prisoner Desolation Williams.  They arrive to find the town empty except for some folks…

John Carpenter’s first sequel.  Escape From L.A. brings back Snake Plissken.  The setup here is that in the late 20th century, a Presidential predicts a major earthquake will hit California and Las Vegas because of their sinful ways.  Unlike Pat Robertson, his prediction comes…