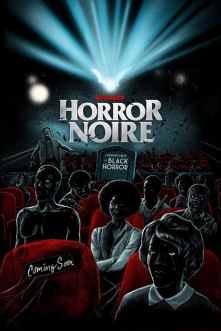 When you think of horror, it can often seem like people of color don’t exist. The Universal classics were devoid of black people. And even when they were present, they were violent savages (1933’s King Kong).

But Horror Noire looks deeper into the presence of the black community in horror films.  It is not really hard to find black horror fans today. And really, horror has a long history of popularity in the black community…but often with very different lessons.

The film opens by noting the most famous horror film of them all is a film a lot of white people do not often cite as a horror film.  But you can see why Birth of a Nation is truly horrific in its story and racist portrayals of black men.

Through interviews with writers, directors and many actors the decades of horror are explored.  Early on the documentary explores forgotten films from the 40’s such as Son of Ingagi by Spencer Williams (most remembered as Andy from Amos & Andy).

There is a heavy look at the 70’s with regard to films that came out during the height of blaxploitation films. While films like Blackenstein do not fare well, Blacula and Ganja and Hess transcend the genre.

There is a terrific statement in the film:

The insights from actors in regards to their roles is key. Kelly Jo Minter, Ken Sagoes and Miguel A. Nùñez Jr all bristle at the notion that their roles were incidental. Of course, they were aware that in many cases they were the only people on the set of color…but as Sagoes notes, he was happy to have a check.

Horror Noire is a worthwhile documentary that I found fascinating and educational. I highly recommend sitting down for it.

As an aside…Jordan Peele…while you are changing the face of horror…please do not forget about Keith David, Ken Foree and Tony Todd.