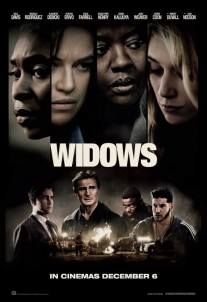 Veronica, Linda and Alice have lost their husbands in a tragedy. They discover their husbands were professional thieves. To add to their grief, they find their lives under siege, specifically from Jamal Manning.  While he is running for public office, Manning is also a local crime lord…and it so happen’s the women’s husbands died stealing from him.  He wants his money and gives them a month.

When she discovers her husband’s records of all her heists, Veronica brings the other widows together to try and complete the next heist that her husband had planned.

Widows is one of those movies that you don’t really get prepared for from the trailers.  Most Heist films are heavily focused on the planning and the heist. Widows is more interested in setting up its characters.  Everyone feels important.  We walk with them as their lives intersect. This is to the film’s benefit.  We get to really know everyone involved, both the heroes and villains of the tale.

Viola Davis gives a great performance as Veronica.  She is both vulnerable and tough as nails.  Colin Farrell and Robert Duvall play son and father of a political dynasty that are at each other throats.  Daniel Kaluuya is riveting and immensely terrifying as Manning’s right hand man.

Director Steve McQueen makes some bold choices in the film (one sequence takes place within a car, and we only hear the actors as the camera stays outside, as the focuses on the car itself). The end result is a very compelling character film that happens to feature a heist.  Managing some excellent surprises before it ends, I found Widows a very satisfying watch.