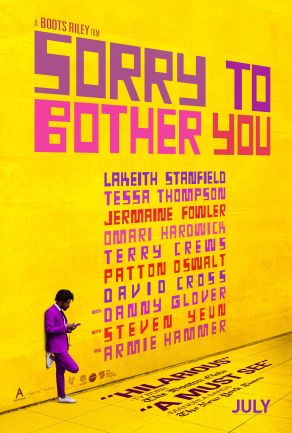 Cassious (Cash to his friends) Green is just hoping to get a job, though he fears his life will never amount to anything at all. He wants his life to mean something. He rises up to be a top telemarketer and then is faced with the choice of staying with his co-workers as they fight for better pay and benefits…or accepting a promotion that will solve all his financial problems.

Sorry to Bother you explores Cash and his temptations in a ever so slightly heightened reality. There is a top program called “I Got the S#!t Kicked out of Me” where people go on to be beat up and humiliated (this bit actually reminded me of the film Idiocracy where a hit show in the future was “Ouch! My Balls!”). A new trend in the country is a company called WorryFree which signs people to work contracts and provides for their living expenses. Which sounds great until you realize people are sharing a room full of bunk beds as their home and are forced to do menial task work.

The film skewers working and upper class dynamics as well as race and culture with precision. Writer and director Boots Riley infuses the film with terrific over the top visuals, such as when ever Cash is calling a customer, his desk drops into their house. As his life improves, his old furniture and appliances break open as newer things unfold.

The film has a gag about the black cast using “white voices” and in a stroke of hilarity, Riley has employed white comedians like David Cross and Patton Oswalt who are then dubbed over the voices of stars Lakeith Stanfield, Omari Hardwick and Tessa Thompson.

The cast is terrific. Stanfield was memorable in Get Out, but he carries the moves on his shoulders and does so memorably. Tessa Thompson is just golden as she disappears into the role of Detroit, Cash’s artist and activist fiancee. They are supported by a great cast including Terry Crews, Jermaine Fowler, Kate Berlant and Steve Yeun to name but a few.

Boots Riley and his cast and crew have made a terrific film that is socially tough and biting, hilarious and downright unpredictable. Nothing really had me prepared for the film, and it was rewarding to watch.