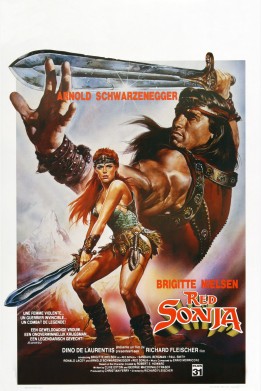 This film is an example of not getting your ducks in a row.  The producers wanted to capitalize on the success of Conan.  They decided on Red Sonja, a warrior woman within the same universe.  Well, sort of.  Red Sonja as written by Howard was not set in the world of Conan at all. She was a swashbuckler in the 16th century.  Roy Thomas introduced her in the Conan comics.

The producers convinced Arnold to return as Conan for what was supposed to be a glorified cameo, though, basically, he was tricked into a co-starring role.  But here is where they also ran into problems.  It turns out they did not have the rights to use Conan.  So, instead, after a brief prologue getting us up to speed on Red Sonja’s past (her family was killed when she rejected the advances of the evil Queen Gedren, who also had Sonja raped by her soldiers) we see Not Conan.  Now called Kalidor, he is on a mission, but keeps running into dead ends.  His destination is a temple where Priestesses are preparing to destroy a Mcguffin called the Talisman.  It is super powerful, so evil people want it, and the ceremony is interrupted by Queen Gedren.

One Priestess escapes and finds Not Conan.   She is Red Sonja’s sister.  Red Sonja has been training to be the Ultimate Warrior. And her trainer confirms she is officially the best.  But she should really trust men better.  This is one of those weird cartoon feminism things.  It also is a little odd that she is only distrustful of men, considering it was the Queen that had her family killed.  But whatever.

Red Sonja goes on a quest for vengeance after her sister dies, but also to, you know, destroy the Talisman.  She is joined by Not Conan, a boy prince and his man servant, the Beast Rabban. The second two characters are more comic relief, which undermines any possible seriousness the film has.  And Brigitte Nielson is not the most charismatic actress as Red Sonja.  Which is a problem, as she has to carry the weight of the film. Add to that the fact that this is her film debut and it seems remarkably unfair to her.

Directed by the same man who directed Conan the Destroyer, Richard Fleischer, this film really lacks the excitement of the Conan Films. A lot of the action seems repetitive and kind of boring. Red Sonja has enjoyed a resurgence in popularity, but this film does her no service.