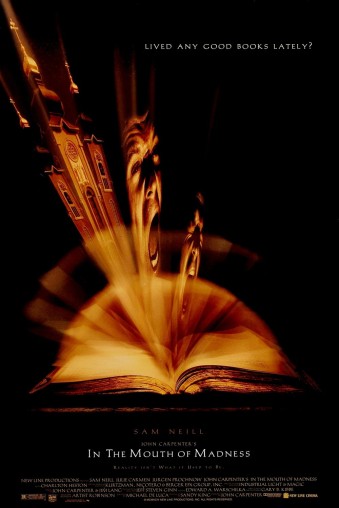 Carpenter returned to the big screen for his next endeavor.  A mind-bending Lovecraft inspired horror film.  Starring Sam Neill, In the Mouth of Madness is about insurance investigator John Trent who is looking into the disappearance of famed horror writer Sutter Cane.

Cane is like Stephen King in popularity, as well as his books being centered around a certain geographical location. Sent on his quest by Charlton Heston’s Jackson Harglow (the publisher), Trent starts to discover that Cane’s books are having a profound and violent impact on his readers.  Trent is finally able to create a map using portions of covers to Cane’s previous books.

He embarks on his journey with publisher liaison Linda Styles (Julie Carmen).  As they arrive, they start noticing something askew with the small town of Hobb’s End.  The buildings all fit locations described in the books.  There are people who seem to be from the books.  At one point, Trent tries to debunk this by pointing out that that they would be able to see an ancient church from a window, but Styles points out he is looking from the wrong window.

As the world seems to unravel before Trent’s eyes, he fights believing what is true.  In the Mouth of Madness is the final film in Carpenter’s loose Apocalypse Trilogy (the first is the Thing and second Prince of Darkness).  And it is a perfectly trippy film.  Carpenter uses the Lovecraft elements particularly well.

The visual effects are very well done, feeding the creepy vibe of the film.  Much of the early part of the film suggests Trent is hallucinating, but upon arriving in Hobb’s End, it is clear that something is truly wrong.  The effects feed this twisting of reality in a particularly effective way.

Carpenter’s direction is on point in this film, he is in control and not having to worry about studio concerns like he did with Memoirs of an Invisible Man.

The cast is very good, and Neill sells both the skeptical investigator and the man losing his mind.  Julie Carmen has the second biggest role in the film, and she is terrific as both support and foil for Neill.

The weakest link is the soundtrack.  Carpenter went for more of a rock vibe, which does not support the film in the way his earlier soundtracks did.

Still, in the end, this one of Carpenters stronger entries and has a lot to enjoy for the viewer.