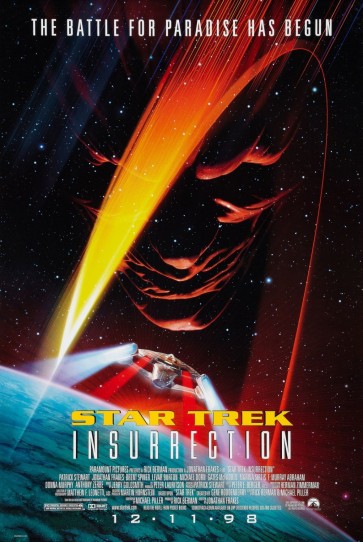 After a rousing success with First Contact, Jonathan Frakes returned to the directors chair with Insurrection.

When Data goes haywire as part of an undercover science team observing a small community on a remote planet, the Enterprise is called to investigate.

When they arrive, the peaceful Ba’ku are discovered to be aging very slowly. As they dig deeper, they realize there is a dark conspiracy at play to remove the Ba’Ku so the planet’s unique radiation can be harvested.

Picard and his crew, of course, side with the Ba’ku and work to stop the attempt to forcefully re-home them.

This film seems to be a less popular entry…but honestly? I do not think this is the film is “bad”.

Largely, Star Trek films lean towards a larger and more “epic” adventure. Stories bigger than the TV series would have allowed.  But Insurrection is a pretty small scale story.  And it feels like it easily could have been at home as another episode of the Next Generation.  But this is not a bad thing.

Insurrection is an action film with small level ethical questions.  And it is a lot of fun.  They lean into jokes where the crew all start to feel re-invigorated by the planet…and even find sone ways to make it a bit meaningful (as Geordie’s eyes heal and he is able to watch a sunrise in a way he never has been able to in his life).

There is some nice twists with the villains and F. Murray Abraham rages like a master.

Is this up there with the best of film Trek? No, but it is a solid Star Trek tale that is a lot of fun.