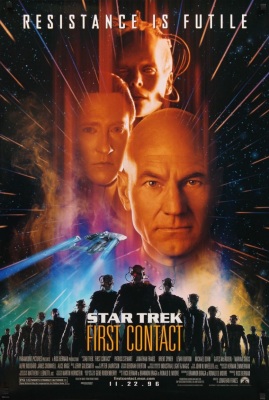 For the Sophomore voyage of the Next Generation crew, they pulled a Wrath of Khan and a Voyage Home.  They reached back to a central villain from the the series, the Borg, and added time travel.

Picard is still haunted by a voice from his time in the Borg Collective. When he senses the Borg are mounting an attack on the Earth, he is surprised to learn that the Federation feels there is too much risk for him to be there and command that the Enterprise patrol the neutral zone.

Picard and the crew decide they cannot sit things out. They arrive to find that the Borg are on the verge of victory, but Picard gives the fleet the orders to hit the right coordinates to destroy the Borg ship.  A small escape ship trails out and the Enterprise follows it, only for it to open a rift in tine and space, they realize as they follow, time is changing around them, the Borg have gone to the past to assimilate a defenseless pre-Federation Earth.

The Borg manage to damage a small community that happens to be the base of operations of the first man to achieve Warp Speed just days before his flight. After the Borg ship is destroyed, the Enterprise crew sets about making sure the flight happens.

But while Riker and his team work to correct history, the Borg managed to get to the Enterprise before their ship was destroyed and Picard must lead the charge against the attempts by the Borg to take over the Enterprise and its crew.

First Contact is highly regarded, and not unjustly.  It is easily one of the best of the entire film series.  The Borg provide a new perspective on Picard and pairing him with Alfre Woodard’s 21st Century Lily (who ends up trapped on the Enterprise) is a perfect choice as she is able to see past his authority and is not afraid to call Picard out in a moment of machismo.

The film mines a lot of humor from Zefram Cochran’s unwillingness to embrace the hero Geordi and Riker expect him to be.

There is a lot going on with themes of heroism, revenge, blinded by one’s perceived righteous anger and fear of the demands others place on you.

The performances, from the regular cast to Alice Krige as the Borg Queen, James Cromwell as Zefram Cochran and the previously mentioned Alfre Woodard are some of the best of the franchise.

The film holds up as a true high water mark for what the Star trek Franchise can be and is easily rewarding for multiple visits.