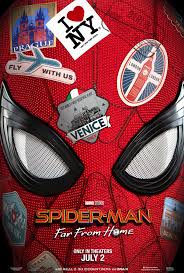 After the massive epic that was Avengers Endgame, a smaller story to actually close stuff off may seem like an odd choice. And yet?  Well, it may have been what was needed.

Bringing back director Jon Watts and the cast of Homecoming, we get a personal story in which Peter Parker really just wants to go on his school trip abroad and confess his love to MJ. But things are complicated.  It turns out that pretty much every major character from Homecoming was caught up in the snap.  And now they have to deal with the fact that all their classmates are now five years older.  The film explores some rather interesting aspects…like all the returned people who were displaced.  Peter and May found themselves homeless, which was one of those things you just do not thing about in the grand schemes.

It turns out that Nick Fury is trying to reach Spider-Man, but Peter refuses to take his calls. But once on vacation in Italy, the class comes under attack by a water monster, which is defeated by Mysterio. A mysterious man who Nick Fury informs Peter is from an alternate earth where he fought the threat of elemental men that are now plaguing Peter’s world.

Far From Home bumps up certain characters too much bigger roles, and it is to the benefit of the film. Holland and Zendaya have real chemistry and their storyline is both adorable and a lot of fun.

The Mysterio storyline is really well done.  There is a scene where his illusion powers is straight up the stuff of the comics. The visuals in the film are terrific and Gyllenhaal gives a solid performance.

Unlike Homecoming, Happy seems more invested in Peter and Spider-Man. This makes sense on a few levels, but I really did enjoy their interactions in the film.

I really enjoyed this latest outing, even more than Homecoming.  It is funny, has heartfelt moments, good performances and great visual effects.  Oh, and stay for the Mid and Post Credit scenes.  They are game changing moments.