And so here we are at Quentin Tarantino’s ninth film (Apparently Death Proof does not count?).  A pretty loving homage to the Hollywood of the 60’s, Tarantino weaves a tale of fading actor Rick Dalton and his best friend Cliff Booth and their place in it all.  Cliff is less bothered, content to help out his friend and then spend the evening sitting in front the TV with his dog. But after a meeting with producer Marvin Schwarz, Rick is realizing he is becoming…well obsolete…and it scares him.

I suspect Dalton’s crisis is not uncommon in Hollywood…but does it make for a great story?

Yeah.  It turns out that here? It sure does.

Now, of course, this is in part, due to the performances of both DiCaprio and Pitt as Dalton and Booth respectively. DeCaprio’s portrayal is both hilarious and endearing. Pitt gives Booth a real sense of casual cool. 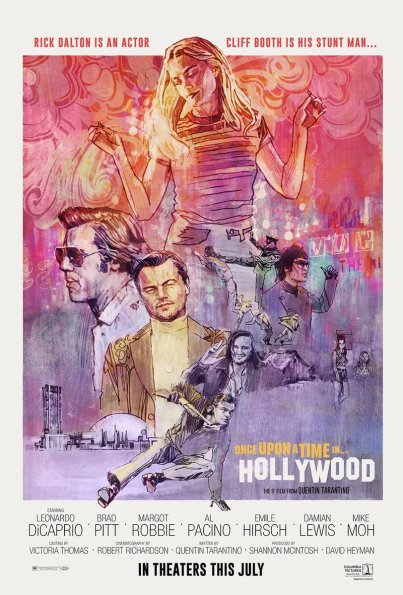 The writing is both the cleverness we expect from Tarantino matched with compelling characters (there is a bit of a question if Cliff is maybe a darker guy, but the film leaves the door open on just how dark). I would say the weakest link in the main characters is Robbie’s Sharon Tate. Not because Robbie is a bad actress. She is charming and kind as Tate.  There is a sequence where we see Robbie express insecurity turning to joy as she watches a movie she is in with an audience. Robbie sells this moment. But she feels so incidental to the story for much of the time.

The cast is just full of great talent… Kurt Russell, Timothy Olyphant and a pretty endless group bringing their A-game.

Visually, the film feels it is of another time, truly like a creature of the 60’s. And the soundtrack is darn near perfect.

My only real criticism is a somewhat lazy time jump that glosses over six months. But, admittedly, had they shown all of it, the film would be, like five hours long. And I do like listening to the Kurt Russell narration.

I found Once Upon a Time… In Hollywood great fun.  Bear in mind, this is a Tarantino film…if you hate his previous work, I don’t think this will change your mind. But fans will appreciate this one for sure.