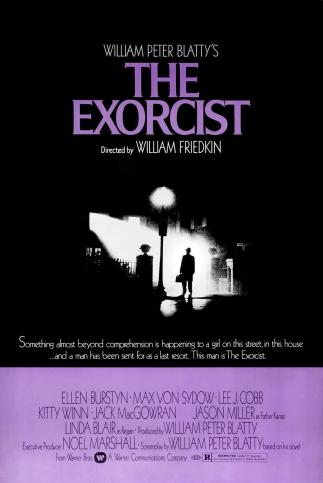 It is hard to come into the Exorcist without preconceived notions. The stories of people vomiting or running out of the theater in terror may even set some people up for disappointment.

On an archeological dig Father Merrin discovers some rare and mysterious artifacts.  He suspects this is a portent of coming evil.

Elsewhere, Young Regan lives with her mother, a well known actress. Regan is exhibiting strange behaviors, and at first, her mother seeks medical intervention. In addition, there are strange noises heard in the house.  But as Regan’s actions get more and more disturbing and hard to write off as “puberty”, she becomes more desperate.

Meanwhile, Father Damien Karras is a preist who tends to favor psychological answers over faith ones. He finds his own faith in a precarious place.  Karras is brought in by the Catholic Church for consultation. He initially pushes for psychiatric treatments, and believes there is nothing darker at play.

Karras is also being questioned by a police Detective, Lt. Kinderman.  Kinderman seems genuinely interested in Karras and they strike up a friendship through the course of the film.

Reluctantly, it is determined that Regan is afflicted by a demonic entity. Father Merrin is brought by the Church t lead the exorcism. What follows is a battle of will and faith.

The Exorcist has earned it’s status very honestly. Even today it is an unsettling watch.  It is not the special effects or shocks that are behind this. Instead it is the film’s steadfast sincerity.  The movie does not treat this as entertainment or a joke.  And it is this sincerity that gives the more shocking stuff their real power.   And it also makes it easier to overlook some of the more outlandish moments, such as a head turning all the way around.

The performances are top notch.  Jason Miller plays Karras with a genuine pain… a man plagued with hurt and doubt. Max Von Sydow imbues Merrin with a strong gentleness.  And Linda Blair takes Regan from an adorable child to gut punching monster.

I have often said that you take from the Exorcist what you bring to it. If your world view is hopeless, it will seem like a hopeless film. I have always tended to a more positive approach and feel that the film ends on a truly hopeful note.

The Exorcist is not schlock, even when it indulges more standard horror tropes.  Instead, it uses those shocks to explore faith, life and meaning.  There is a wonderful and brief exchange between Karras and Merrin. Karras asks Merrin why the demon chose Regan.  “Why this Girl?”

Merrin responds: I think the point is to make us despair. To see ourselves as… animal and ugly. To make us reject the possibility that God could love us.

I think the movie seeks to challenge that. That it aspires to refute the demon’s assertion.  That maybe we are not merely animal and ugly. That we can be more.