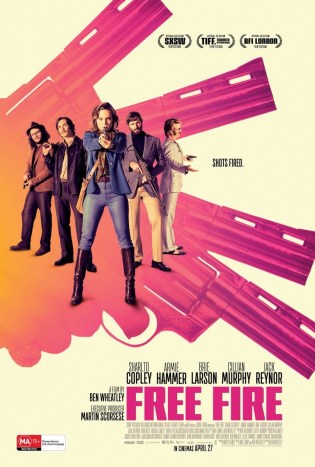 Ord and Justine have brokered a black market arms deal with Chris and Frank.  Just as the deal seems done, a beef between two of their henchmen breaks out that results in a shootout.  An hour long shootout. And then things get bad.

I am not joking…a solid hour of the film is the shoot out.  First we see it divided between the two groups, but then it takes a twist bringing them together, only to throw everyone into “every man for himself” insanity.

Free Fire is playing with a tongue in cheek attitude and a seventies low budget action feel. The opening credits have a grindhouse movie feel.  You also see this in the clothing styles and hair.

And the lighting aims to give a feeling of grit. In fact, I am a little surprised they did not add an extra bit of “film grain” for an authentic aged movie look.

The film kind of stumbles in it’s tone.  It is going for “action Comedy”, but the long and bloody shootout feels to serious for the lighter dialog.  Which makes the most violent and comedic scene (as the two underlings that caused the shootout to begin a man to man fight to the death set to a John Denver song) almost feels out of place.

Free Fire also starts to just get tedious as it goes on, because one long fire fight just starts to wear thin after awhile. The high point is the cast.  Especially especially Sharlto Copely and Armie Hammer. Cillian Murphy is dependable, though Brie Larson feels wasted as her character seems to lack much personality.

While the trailer seemed promising as a wild and crazy action comedy, the film never finds firm footing in the comedy camp, as the comedy usually gives away to extended action.  But the action lacks a lot of humor.  And one of the most important things in action comedies is that the action and comedy intersect.