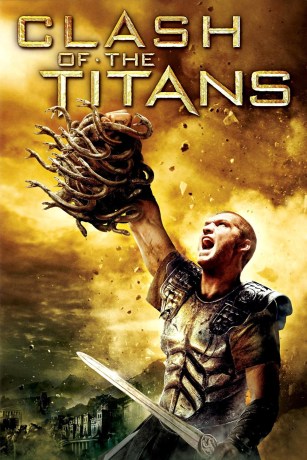 The new millennium brought a renewed interest in Greek mythology based films.  This, of course, meant that a remake of Clash of the Titans was probably inevitable.

The modern take is…well, different.  Here, Zeus is angered by King Acrisius and to punish him, he seduces and impregnates the king’s wife Danae.  Angry, he seals her in a box with infant Perseus.  The box is found by fisherman Spyros, who raises Perseus with his wife (Unlike the original film, Danae dies).  Zeus is, of course, angered by this move and turns Acrisius into a monster.

Years later, Perseus is out fishing with his adoptive family.  They witness soldiers tearing down a statue of Zeus.  The soldiers are attacked by demons who also destroy Spyros’ fishing boat, resulting in the death of all but Perseus.  He is found by soldiers who bring him to Argos.  There he witnesses King Kephesus and Queen Cassiopeia.  Cassiopeia mocks the gods and declares her daughter Andromeda more beautiful than any of the goddesses. Zeus and the other gods are watching and angered, but Zeus’ hand is staid by his love for man and the need for their prayers.  But Hades demands that they must make men fear the gods again.  He convinces Zeus to allow him to interfere.

Hades greets the King and Queen and demands Andromeda be sacrificed or Argos be destroyed.  Perseus is convinced to go on a mission to find a way to defeat the titan called the Kraken.  Along with several soldiers, Perseus begins his quest.

You may have noticed there are a lot of changes here.  The film is less a remake and more a re-imagining.  There is no love story between Perseus and Andromeda.  His goal is to make a stand against the gods.  Perseus is in denial of his demi-god status, constantly rejecting any help from Zeus in favor of doing everything “as a man”.

The gods themselves are worried about man’s rebellion against the gods and their power is waning as fewer people are praying to them.  The only real example of the pettiness and competition between the gods is how Hades was betrayed by Zeus and Poseidon, which drives Hades’ desire to destroy his fellow gods.  Noticeably missing?

The female gods.  I mean, they are in the background.  You see them, but they are pretty inconsequential.  Unlike the original, Calibos is no longer the son of Thetis, and he is merely a pawn of  Hades.  It is disappointing that they push all other gods to the side beyond Zeus, Poseidon, and Hades.  Making it about sibling rivalry is ignoring the rich history of the Greek gods. I suspect the fact that the original film was written by Beverly Cross, a woman, influenced the 1981 films inclusion of women in more equal standing.

In addition, the original cast women over forty in almost all the major goddess roles.  In this update, most of the female roles prize youth and beauty above all.

Worthington is not nearly as engaging as some of his co-stars, which is a problem.

On the upside, the relationship of Spyro and Perseus is brief but nice.  When his wife is pregnant, young Perseus is worried he will be loved less.  Spyro offers comforting words noting Perseus is no less his son than if they were flesh and blood.

And while Judy Bowker’s Andromeda was a luminous beauty, she was not given a lot of time (though we see her decrying the rules of her curse which resulted in countless deaths).  Here Andromeda is seen as a greatly compassionate woman.  We see her going about the city in disguise to help the poor.  She also refuses to accept the notion that others should die so that she might live.

The creature design is largely quite good (though the demons move so fast so as not to allow much detail to be seen).  But even there, you have flawed concepts at work.  Medusa should not be alluring, and yet, there she is in this film looking beautiful until the moment she turns you to stone.

The re-imagining ends up like a hodgepodge of mythical concepts that are thrown together, almost unrecognizable to their inspiration. In place of a romance with Andromeda, Perseus instead falls for the beautiful immortal Io.  And at times, I found myself getting bored.  This is in spite of the fact that everything tries to be much bigger than the original film.  The scorpions are bigger, the Medusa fight is in a bigger temple, the Kraken is larger.

While Clash of the Titans is louder and slicker, it just feels like a pale imitation of its inspiration.