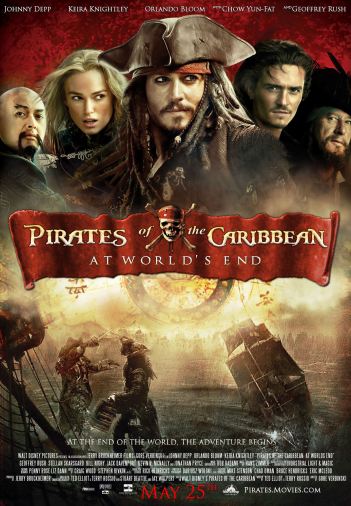 Like, super long. It is ten minutes shy of three hours.

Anyhoo, picking up where the last film left off, the Kraken ate Jack Sparrow and now Elizabeth Swann, Will Turner and Barbossa are trying to rally the troops to find and return Jack from Davey Jone’s locker so they can stop Davey Jones.

And this ends up taking over an hour.  We see Sparrow in the afterlife and boy is he bored.  And frankly?  So was I.  This sequence is just excruciatingly long.  There are so many subplots, it just gets tiring and uninspired.  I found myself constantly wondering about how much longer we had to go.

The films seem to want to position Jack as some magical key to the universe, rather than some lucky idiot.  But really, the whole lunatic rockstar thing is wearing thin at this point.  If you cut about an hour of the film or a little more, this might be a lean and fun adventure.  Instead it makes the the Lord of the Rings: Return of the King look sleek.

Filmed back to back with Dead Man’s Chest, At World’s End tries be a massive epic, but it really only accomplishes feeling ridiculously bloated.

The visuals are quite good, as are the action scenes.  But the road the story takes is so meandering as it is hard to not get bored through great portions of this film.