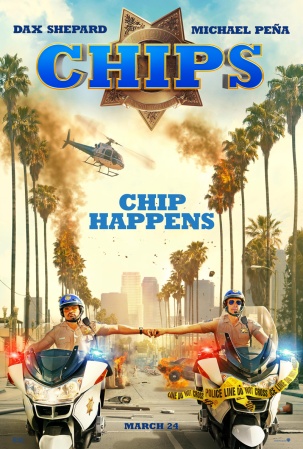 Chips was an action/drama from 1977 about motorcycle cops Ponch and Jon.  I know I watched it as a kid, but beyond Erik Estrada and the other guy?  Don’t remember much.  But when it was announced that they were making a comedy movie based on the show, it seemed like an odd choice.

Written and directed by Dax Shepard, the update begins with Ponch as an FBI Agent who is sent undercover to bust a drug ring suspected to involve crooked motorcycle cops.  He is teamed up with the highly inept Jon, who is trying to save a marriage he does not get is over.  Ponch and Jon are constantly at odds to an annoying degree.  In what I suspect was intended as a “positive” message, Jon criticizes Ponch of being homophobic which leads to, unsurprisingly, a whole lot of “Eeeew! NOT GAY” type of jokes.

The jokes don’t land and the characters lack chemistry.  By the time Ponch and Jon are a team, it feels entirely unearned.  The jokes are forced as well.  This is a shame, as the cast is the one high point of the film.  Michael Peña has great comic timing.  And Vincent D’Onofrio is the villain.  And yet, neither get to bring their skills to the rather uninspired script.  Dax’s Jon is particularly flat.  His real life wife, Kristen Bell just has a sweet persona and it is hard to buy she is this terrible marriage destroying wife.

Chips obviously aimed to fall into the same company of 21 Jump Street…but it misses that mark by a great distance.