Somebody looked at Sylvester Stallone’s chin and declared him perfect for the role of iconic British comic book character Judge Dredd.  And they were not wrong: 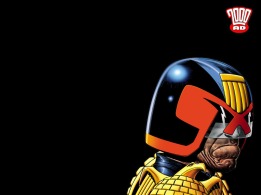 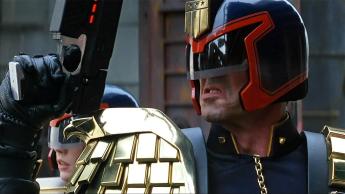 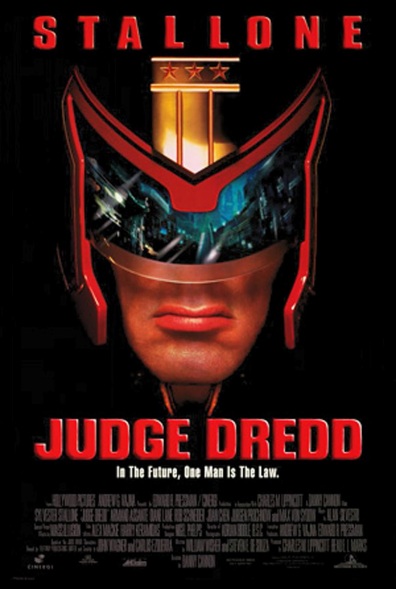 Anyhow, looking for a story, the filmmakers thought the best approach was to tell it through the eyes of SNL alum Rob Schneider.  He is an ex-convict returning home who gets caught in the crossfire between thugs and Judges.  A little background here.  After a nuclear event society is rebuilt in heavily concentrated cities.  In these cities are massive buildings, communities unto themselves. They are known as Megacities.  Outside of the sprawling cities is a desert wasteland populated by outlaws and mutants called the Scorched Earth.  The Society has combined Police Officers with Judges.  You do not go to court, a Judge simply tells you your sentence and that is that.

The most famous Judge is Judge Dredd.  Dredd has no tolerance for lawbreakers.  The comic is a satirical look at fascist societies (the Eagle emblem is not a coincidence, it is meant to acknowledge both America’s national bird as well as the use of the bird as a symbol by fascist societies).  Of course, fans also like the ultraviolence, making Judge Dredd’s popularity complex.  As Neil Gaiman notes, the comic is one of the rare instances where you have something that is both the very thing being commented on and the commentary itself.

While attempting to hide in a robot to avoid death by gang members or a Judge, Fergie (Schneider) is caught and sentenced for tampering with the robot.  In the meantime, Judge Dredd is framed for murdering a critic of the Judges.  He is sent to the Scorched Earth, where he runs into Fergie.  They return to stop a conspiracy to destroy the Judges and establish a new regime.

Judge Dredd is not very good in its story.  It tries to give some emotional depth to Dredd that ends up feeling odd.  Family angst is not something that drives the character and is an unnecessary addition.  The film also tries to hint at a romantic tension between Dredd and Judge Hershey (Diane Lane) who plays the role of the angel on Dredd’s soldier, pressuring him to be less harsh.

There are some notable things about the film.  The costumes look great.  They feel like they are ripped from the pages of 2000AD.  The sets are also like the strip come to life.  The cities and the Megacity blocks are appropriately broken down and seedy looking and the Scorched Earth barren and unforgiving.  Visually, the film is pretty impressive looking.  There are some nice nods to other 2000AD characters (most notably the use of the ABC Warriors robots).  Mean Angel (a cyborg and member of a cannibal outlaw family) stands out.

The cast includes Max Von Sydow, Diane Lane, and Armand Assante.  Most of these choices are good choices.  Rob Schneider is there as comedic relief, but it is not very organic in the story.  There is one amusing moment where Schneider looks over to Dredd on the prison transport and tries to figure out why he recognizes him…Schneider uses his hand to cover the top of Dredd’s head and recognizes him based on the chin.

No, where the film fails is not in its look.  It’s the story.  Trying to create an origin for Judge Dredd makes all sort of unnecessary explorations of his character.  Dredd does not question the Law.  The Law is his life.  You can have Judge Dredd question the application of the Law, but the character loses meaning if he questions the Law itself.

The biggest issue here is that ultimately, they did not hire Sylvester Stallone to bring Judge Dredd to life.  They hired him to be a stock Stallone Action Hero.  And Stallone delivers his lines as such.  It is not that Dredd does not make jokes…but he does not deliver them as one-liners.  He should always sound deathly serious.  Also? Dredd does not smile.  And most importantly…remember that gag I mentioned with Schneider recognizing Dredd?  That scene should simply not happen.  Judge Dredd is never seen in comics without his helmet.  Never.  I mean NEVER.  And yet, in this film?  He is seen far more without the helmet than in it.  This is because it is a star vehicle for Sylvester Stallone, rather than Stalone making a character live on screen.

Judge Dredd pretty much killed other 2000AD film deals, and frankly, it is obvious why.  The film fails in all the areas where it needs to succeed.  Character and Story.