For Americans, the character they probably most recognized from the British comic book series 2000AD is Judge Dredd.  But 2000AD actually had a whole host of characters spawned from its weekly pages.  Almost all of them every bit as violent and over the top as Dredd.  There was Rogue Trooper, the ABC Warriors, Nemesis the Warlock, Bad Company, the Ballad of Halo Jones, D.R. & Quinch and Zenith to name a few.

Back in 1988 or so, I went to Northern Ireland as part of a church mission trip.  I came upon a comic shop there and discovered 2000AD…I came home from the trip with several progs (the term for an issue of 2000AD) and a few books collecting specific characters.  I fell in love with the world of 2000AD…the writers and the artists provided inspiration to my artistic side.

Future Shock! is an entertaining journey through the creation of the comic in 1977 to present day.  Interviews with its staff and creators explore the controversies and successes.  There are may familiar faces for comic book fans (As American companies, especially DC’s Vertigo imprint, poached a lot of their stars).  Included in the film is commentary from Neil Gaiman, Brian Bolland, Alan Grant and Carlos Ezquerra (the creators of Judge Dredd) and more.  One of the stories discussed is the unfinished the Ballad of Halo Jones.  Written by Alan Moore (with gorgeous art by Ian Gibson), it is a story that verged on being epic.  But Moore was frustrated by his treatment by the magazine and walked away, leaving it unfinished.  Both Leah Moore (daughter of Alan and a writer in her own right) and Neil Gaiman lament that it was never finished.  Moore states she wishes she could have convinced her father to return and finish the tale.

The film explores failures as well, for instance, their ill-fated movie plans.  The only result is the heavily maligned Judge Dredd starring Sylvester Stallone.  It is maligned for good reason, of course.  I do disagree with the idea that choosing Stallone was a bad idea from the start…I mean…LOOK: 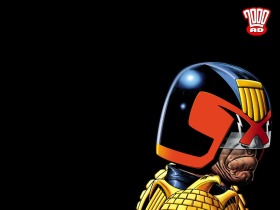 But more on the Stallone film at a later date.  There is a pretty rich history behind 2000AD, and it is pretty well covered by this documentary.  Both fun and educational, it makes for an enjoyable watch.  This includes the titles and the transitions with animated art from 2000AD to great effect.  It makes the film feel like it is moving quickly, as well as allow you to appreciate the rich history of artwork.