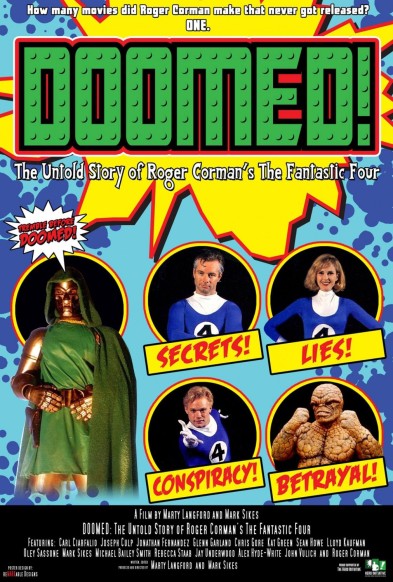 You may think that there have been three Fantastic Four films.  There were the two Tim Story film with Jessica Alba and Chris Evans…and the 2015 film with Miles Teller and Kate Mara.  But there are tales of a first film, never seen by the world.  Spoke in hushed tones.  Okay, not really.  There actually was a first movie made back in 1994.  It was completed and even had release material.  Outside of bootleg copies, the film has never seen the light of day.

The short version is that in the early 90’s, Marvel Comics was in real dire straights (they went into bankruptcy)…this resulted in them selling the film rights to multiple characters, such as Captain America, the Punisher and the Fantastic Four.  The producer with the option for the Fantastic Four shopped the option around, finalizing a deal with the king of low budget film Roger Corman.  The catch? Unknown to the cast and crew,  This producer simply wanted to keep the rights.  He had no plan to release the film.

But there is more to the story, and really?  It is quite interesting.  Doomed! The Untold Tale of Roger Corman’s Fantastic Four delves deeply into the story, giving the viewer insight into exactly how it all played out.  With a cast of actors that were at least semi-recognizable at the time (and many who are still working today) such as Jay Underwood and Alex Hyde-White.

What stands out is that the director, cast and crew were dedicated to making a good movie…though one hindered by a tiny budget.  The effects were limited and the story was not very strong…they never did ADR to make Joseph Culp’s Doctor Doom understandable.  They hired a guy who claimed he was an effects supervisor on Independence Day…and they discovered…he was not.

The people behind the film were passionate, and it become clear that even Corman thought the film was going to be released.  He was creating posters, button and trailers (I have a poster in storage somewhere, as well as a couple of the buttons).  The people involved clearly wanted (and still want) the film to be seen.  And there is a lot of hurt feelings involved, including some understandable bitterness towards Marvel Icon Stan Lee.

The film is a fascinating exploration of the passion that can go into film-making and when those hopes and big dreams get dashed.  Even if you do not care about the Fantastic Four, this tale is epic and engaging.  It is an effective documentary that can give you insight into the more heartbreaking side of film-making.