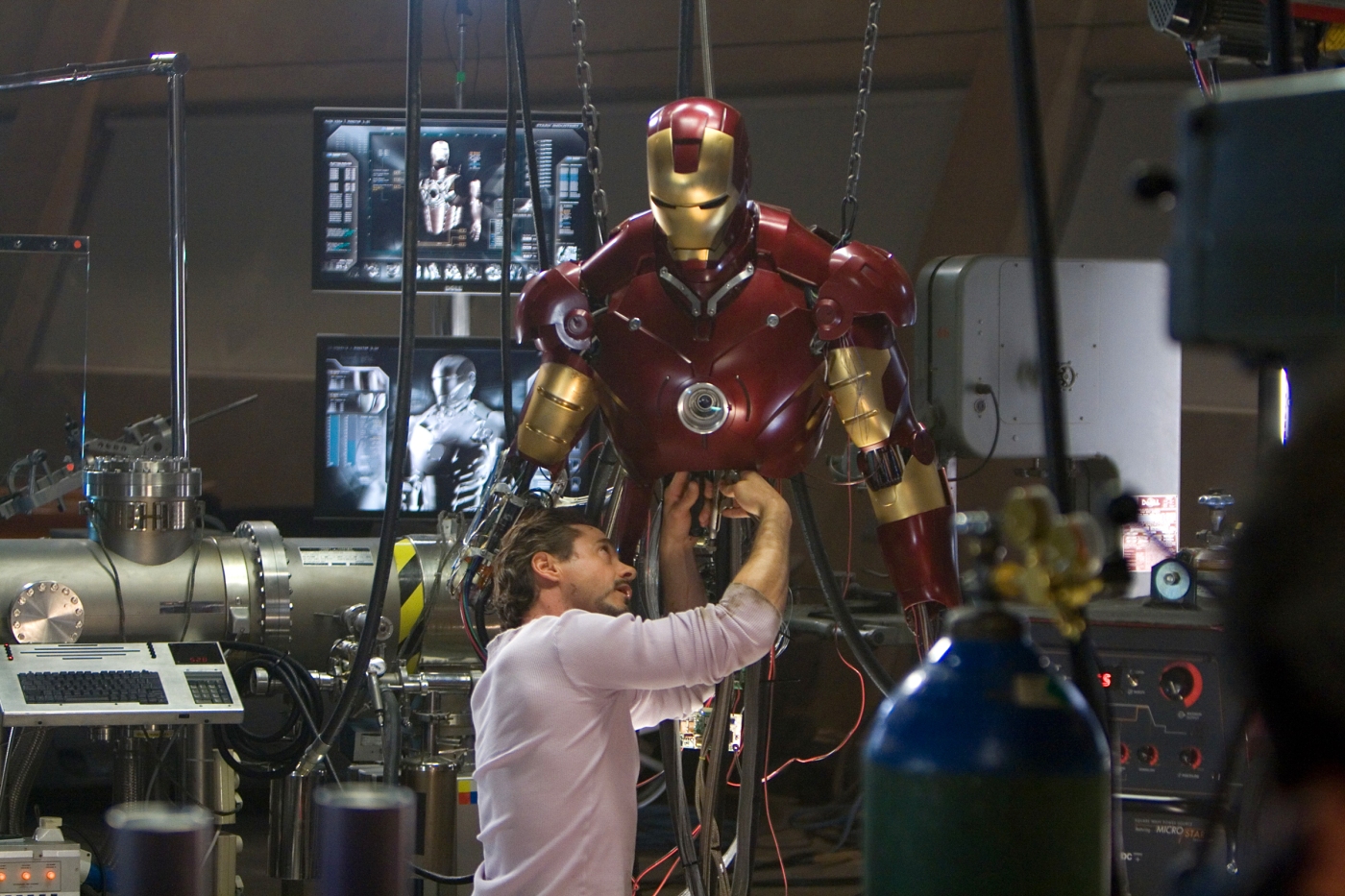 Simply described as: How to start building your bigger, badder franchise.

Iron Man has a history going back to 1990 in attempts to bring it to the screen.  Stuart Gordon (Re-Animator) was on board for Universal…years later, Nick Cage and Tom Cruise sought the role of Tony Stark.  When They announced Director Jon Favreau as director and Robert Downey Jr. as Tony Stark/Iron Man, there seemed to be a collective “Meh.”  I get why Favreau was not instantly met with a cheer.  He had three films to his credit as director.  The idea that he had the chops as director to take on something of this level certainly was at least hinted at with Zarthura… but I was more perplexed by the indifference to the ever talented Downy Jr.  He seemed all to well suited for the role of a care free playboy that is Tony Stark.

The film opens in Afghanistan, with Stark riding in a Humvee.  He has some playful banter with the soldiers, before they fall under attack.  The film does a terrific job of switching the tones from the casual goofing off at the start to the harrowing action and destruction that follows.  After diving behind a rock, Tony is surprised as a rocket lands next to him… Stark noticed his logo on the side of the rocket as it explodes.  We see rough shots of men holding him captive before jumping back in time.  We discover that Stark lives a pretty carefree life…he pays little attention to time, does not worry about losing large sums of cash while gambling and has a way with the ladies.  He seduces a reporter only to leave dealing with her the next morning to his personal assistant Pepper Potts (Gwyneth Paltrow).  He’s a genius who is constantly trying to occupy his mind (playing with cars) but also a terrific pitchman.

When we get back to Afghanistan, Tony discovers he is a prisoner of the  Ten Rings, along with Dr. Yinsen (Shaun Toub) who saved Tony’s life.  The Ten Rings want Tony to build them a new weapon.  For parts, they show him a massive collection of Stark weaponry.  Tony refuses to help.  Once alone, Yinsen compels Tony to use his talents to fight back.  Under the guise of agreeing to make the new weapon, Tony starts designing and building a means of escape.  First, he builds a new version of the magnet repealing shrapnel from his heart.  One that does not require a car battery.

It turns out to be a suit of  armor.  In a thrilling escape, Tony fights the minions of the Tenth Circle, but losing Yinsen in the process.  One of the nice things that the script and performances manage is a convincing friendship between the two, so Yinsen’s death feels like it truly impacts start and that he is both heartbroken and angry at the loss.  After returning to the states, Tony calls for a press conference where he announces-much to the shock of his second in command Obediah Stane (Jeff Bridges)-he is taking Stark Industries out of the Military Industrial Complex.  We also meet an important character to the Marvel movie franchise.  Agent Phil Colson (Clark Gregg) introduces himself to Pepper, wanting to discuss Tony’s escape.

Obediah seems to be an understanding and caring guy.  He’s concerned about the future of the company, but seems to think they can make it work based off of the mini-arc reactor in Tony’s chest (the magnet in his chest).  Tony starts to upgrade his reactor and build a new suit of armor.  There are a lot of fun scenes with Tony stumbling through building high tech armor.  This leaves Tony concerned about his friendship with  Lt. Col. James Rhodes (Terrence Howard).  Rhodey is seemingly frustrated that he sees Stark walking away from helping the military.

Stane reveals he locked Tony out of the company, as Tony is pushing for a more peaceable direction for the company.  Seeing news about the Tenth Circle in Afghanistan, Tony suits up and hurtles through the sky.  He takes out the Tenth Circle, destroying their weapons.  He gets the attention of U.S. Military, which leads to an exciting cat and mouse game with Tony and two fighter jets.

Stane works to build a much bigger and more aggressive suit of armor. Of course, Stane and Tony come to blows in an big armor battle.

The chemistry between Tony and Pepper is excellent.  It is playful, flirty and not overwrought with melodrama.  Paltrow was a terrific choice and the character really shines.  Downy Jr. and Paltrow are able to really make the relationship sell with the audience.

Downey Jr is terrific in the role.  He seems to effortlessly move from fun and flirtation to passionate and intense focus.  At no point does he seem like an ill fit for the part…Tony Stark works in this film because you believe Downey Jr.

Bridges makes a terrific Obediah Stane.  He seems so kind and generous at the beginning, but when the charm needs to give way to menace, he really pulls it off.  Howard’s Rhodey is a nicely handled role.  He is a pro as a soldier, but he knows his friend well, and commits to helping him in any way he can.

Again, watching Tony develop the new armor provides a lot of laughs (Tony gets hurt a lot).  His mechanical assistants seems full of personality and humor as we watch them work together.  The armor effects are terrific and give the illusion of weight and mass that feels like it was on the set.  It feels like it really would be functional.  Even when they deviate (such as Jarvis being an A.I. instead of a real person) it often favors the film.

I felt the biggest flaw in the film was the end battle.  It felt tacked on, like they suddenly realized they were almost at the end and had not resolved the main conflict with Stane.  It’s almost to quick, and honestly a little confusing as to how the giant arc reactor was impacting what was going on (it seems to hurt Stane, but help Tony).

All in all, Iron Man was an exciting and fun film, cementing the idea that Marvel movies were fun and exciting rides…but that they also had solid performances and decent-if not outright terrific-stories.  Of course, while it was exciting that they were doing something new-a movie universe-it was hard to tell if this would be a successful venture or a failed experiment.