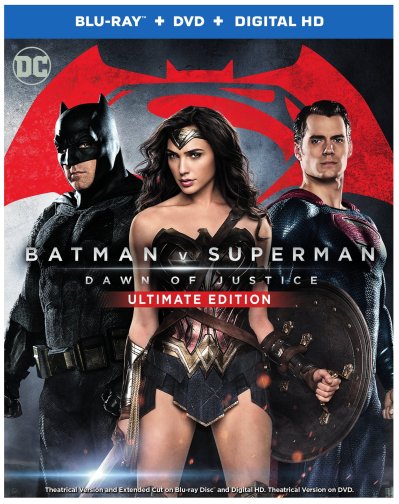 So, I took the time to watch the Ultimate Cut of Batman V Superman.  And you know what?  It is a great improvement.  It was enough for me to consider the film enjoyable.

The added footage really enhances the story filling in the blanks.  We now understand why Superman misses something that results in major death and destruction, and to cap it off, we see him helping locate survivors.  Also, while I already thought Bruce Wayne’s introduction was one of the best sequences in the film, we get extra seconds to show Bruce’s dedication to helping survivors.  This version also explains why Batman’s branding of criminals “results in a death sentence”.  It is part of Luthor’s plan to manipulate Superman’s perspective on the Batman.

On top of that, while we got evidence of Lois Lane’s dedication to find answers, finally we see Clark actively doing investigative reporting into Batman, as well as the discover of Luthor’s reach in influencing public opinion towards some of Superman’s actions.

This is not to say all my concerns and criticisms are alleviated.  For one, I really wish they would have Superman talk less like Earth is not his home.  He has spent 99.9% of his life on Earth.  Raise by citizens of earth.  He sees them as mom and pa.  He loves Lois.  He still talks about Krypton as “My world” as if Earth is not also his world.  Batman is a great detective, except where Luthor’s plan comes into play.  Superman gives up trying to convince Batman to help him a little to quickly and goes into fight mode faster than Superman really should.  Superman is not a dumb brute.  And honestly, I cannot help but find the thing that gets Batman to pause is…their mothers are both named Martha.  While that is certainly an interesting coincidence…but that that is the only thing that causes Batman to question his view on Superman seconds before killing him…oi.

But still, the Ultimate Version has made this a much better film, one I feel more confident in.  If this had been the theatrical version, the list of my negative feelings would not be nearly as long.  In addition, after watching the promo trailer for the upcoming Justice League, I am actually looking forward to seeing it.  The preview has an interesting take on Aquaman, Flash looks like a brighter heroic addition to the DCU.  Even Batman and Wonder Woman have some fun banter.

It is to early to state as fact of course, but the Wonder Woman trailer looks exciting and fun.  It looks like the Wonder Woman movie people have been wanting for a long time.  And if Suicide Squad is as fun as it looks…well, DC might have three winning films in a row.  Four if you include the Ultimate cut, though “winning” might be a slight overstatement.  But the future is showing a brighter potential for DC films.