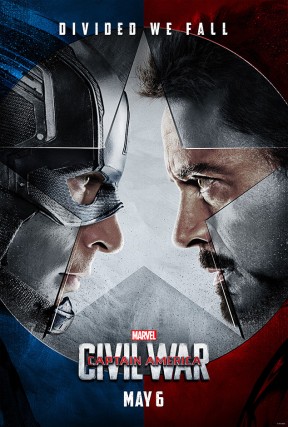 Captain America: Civil War was a risky gamble.  It has a bloated cast.  I mean, Captain America is joined by practically everyone (Except Thor and the Hulk).  The film was also going to be introducing us to a couple Major Players in Both the Black Panther and Spider-Man.  There was always the possibility that this would be so bogged down, we would have Marvels first failure…the first Marvel film that outright sucked.

And the film should be a huge mess.  We are being introduced to characters left and right.  And as usual, the villain of the film is pretty thin.  And yet, somehow?  The film works.  It stand and manages to remain extremely engaging.  The film is dealing with the fallout of collateral damage we have seen through the previous films.  All that destruction we have seen through the Avengers, Thor, Captain America the winter soldier.  Culminating in an event in this film in which an attempt to save people kills several visiting Wakandans.

The United Nations is determine to intervene.  And Tony Stark, after being confronted by an angry and heartbroken mother (Alfre Woodard) whose son died in Ultron’s Sokovia attack, is determine to see it happen.  He, quite understandable, sees a need for Oversight.  And this is what sets off the Conflict within the Avengers.  Steve Rogers is certain that being shackled and having to get permission to fight the bad guys is a bad idea.  We of course, sympathize with Cap, but one of the things the film does very well?  The character motivations.  They make sense.  You understand why they choose the way they do.  And the the fact that certain characters miss the villain’s big plan is quite believable.

The film is action packed, but not at the expense of the overall story.  The characters get meaningful exchanges and yet, the film avoids feeling overly bogged down by a sense of self importance.  The events matter, questions are asked, but without the self aggrandizing approach other Super-hero films had recently.  Not naming names.  The cast does great work with the script they were given.  They bring the characters to life.

And then there is the humor.  This is by no means a light film, but it has very effective humor.  The film is not afraid that if we laugh we might miss “the important and heavy epic story being told”.  These people are friends.  They have history.  They care about each other.  And that is what gives the story it’s real conflict and weight.  But it is also those established relationships that allow the fun.

Of course, the big question was…Spider-Man and the Black Panther-will they work?  It is nice that we do not get an origin story (it should be pretty clear that T’Challa was already the Black Panther, he is not becoming the Black Panther for revenge).  But he does get a nice story arc focusing on the thirst for vengeance, leading him to wisdom in his new role as King.  Chadwick Boseman plays T’Challa as young, confident royalty.  And yet, when he suffers lost, he gains a restrained ferocity.

And Tom Holland?  He is Spider-Man.  The portrayal of Spidey in this film was almost instantly lovable.  His rapid fire chatter was dead on.  He looked great in costume and his position of siding with Tony makes complete sense.  I am genuinely excited to see both Spider-Man and Black Panther’s solo films.

James Gunn (Director of the Guardians of the Galaxy films) said this was the best Marvel film to date.  And, in the end, if it is not actually the best?  It is pretty darn close.  This is a terrific adventure and worth seeing.