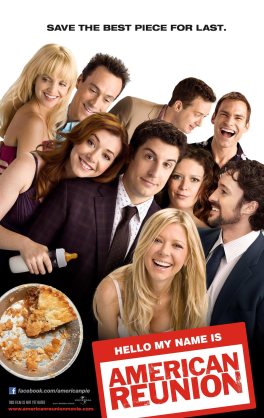 And the franchise came full circle with the first theatrical release since American Wedding. Overseen by director Jon Hurwitz, (director of Harold and Kumar Escape from Guantanamo Bay), American Reunion completely ignores the films that came after American Wedding.  This was, of course a wise decision.  Also wise?  Centering the film around a class reunion.  This keeps from having to come up with weird plot devices as to why everyone would be located in the same area.

And they brought everyone back for this round.  Granted, in some cases it is a blip and you miss it moment (such as Natasha Lyonne’s character Jessica).  The film introduces us to Jim and Michelle’s life as parents, with a scene reminiscent of the first film’s opening sequence…except this time around, it is being caught by the kids.  Truthfully, this scene does not fully work.  I get they are setting up that their relationship is strained.  But I think they might have been better to set this scene up with the couple trying to have together time that they sorely miss.  Most parents have tales of the kids walking in on intimate moments and there is all sorts of ways to play that.

However, Biggs and Hannigan really work well together.  We also meet Kevin, who is now a happily married father and house husband (for the most part).  Oz is now a successful sport-caster on a sports network and Finch is appearing the wandering soul he has always tried to be.  Stifler (with no acknowledgement of his supposed Girls Gone Wild career in Band Camp) is now working as a temp for a Geek who has made it big.  Apparently his biggest nightmare.  Tara Reid returns as Vicky, who causes Kevin to question the could have beens.  Heather and Oz are no longer together and their story line focuses on the re-kindling of their relationship.

The cast remains likable in the film, especially when they get to channel the qualities that made them sympathetic.

The film focuses on marriages/relationships in trouble and questioning where people find themselves years after high school and the disappointment they may feel.  Some of this actually works well in the film.  Jim and Michelle are struggling to make it work, and Jim’s dad is struggling with being a widower.  Jim shows a lot of his dad’s heart, even in scenes where things are starting to fall apart.  Jim has an opportunity, but really walking out on Michelle or cheating on her are not true options for him.  Oz and Kevin deal with temptations against their relationships.  Oz keeps thinking his girlfriend (played by Katrina Bowden) is cheating on him, due to him finding her in many compromising situations.  But, of course, his heart yearns for Heather.

This is a fairly decent return to form for the franchise.  American Reunion has welcome laughs and heart.  The ongoing story line of Stifler’s mom is actually resolved in an unexpected way that works nicely.  It does not abandon it’s gross out humor, but it is not so overwhelming as to becoming off-putting.  If you enjoyed American Pie and American Wedding, this is a decently enjoyable enough follow up.