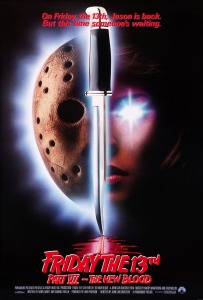 There was only one year the entire decade without a Friday the 13th movie released.  1987.  But 1988 sure fixed that problem!  Well, I gotta give them points for trying something a little different. Instead of a bunch of teen victims with nothing to help them, we get a girl with telekinetic powers.

The story opens with a backstory, in case this is your first Friday. And old man tells us that Jason is still down there…waiting. Then we meet a little girl whose parents are fighting. According to what we hear, daddy hits mommy. The little girl runs to her family’s doc and jumps into a boat with dad running out after her. He gets to the end of the dock, making all the apologies abusive dads do. But the little girl will have none of it and her super powers kick in…see, she makes water bubble…and that bubbling trail is deadly…it goes back the fancy dock. It starts to shake and then collapses, taking Daddy with it. He sinks to the bottom and dies.

Fast forward to when the girl (Tina) is older and apparently suffering from years of therapy. Her mother is driving her back to Crystal Lake, to confront her demons with the help of her psychiatrist. The actor playing the psychiatrist is none other than Bernie of the weekend of Bernie films. It’s pretty obvious early on he has sinister intentions, the film makes no attempts to hide that. Really,it would have been far more interesting if he was a good and caring doctor. Next door are a bunch of partying teens. Thankfully, we get a realistic portrayal of a group of teens this time around. Everyone knows that in each group of friends you have one rich, hot, bitchy girl. You have one geek. One dope smoking fiend. One or two “plain girls” who compete for one guy. And at least one really horny couple (this film gives us two glory hallelujeh!). And finally, you have the one guy who does not really like the others, a bit of a rebel, but with a heart of gold.

When Tina’s luggage bursts open, the rebel tries to help her, and she rudely brushes himself off. The obvious reaction is to be intrigued and assume it was your fault she was rude to you…and that’s exactly what he does. She ignores his attempts to give a shirt back to her, storming off into her house. So he WASHES it and gives it back to her. And invites her to the birthday party they are all there to celebrate. So she goes. Of course, hot, rich bitchy girl humiliates her and she runs outside. She stands on the dock, crying about her abusive dad. Wishing she had not killed him. She concentrates on the water and frees Jason. That makes two movies where Jason is set upon the world by the people who stop him. Good going.

She faints, Jason looks around, decides killing unconscious people is not very fun and goes off to kill awake people. We have death by fist, tree, tent spike, tree pruner, axe and the old fashioned head crush. There is even an homage to Jaws…which the director makes all about the T&A. This film actually has some of the most offensive “victims see Jason and wait for him to kill them” moments. This homage is the worst of them. Because when Jason bursts from the water about ten feet away, the girl’s response is to scream and tread wildly. Pretty soon Tina and her love interest, the Rebel with a Heart of Gold are all that’s left. But supergirl Tina and the Rebel with a heart of gold fight back. Well, supergirl Tina fights back, the Rebel with a Heart of Gold just gets thrown around…a lot. Finally, supergirl Tina makes the house blow up (will, it’s a bit more nuanced than that, but I don’t feel like giving a blow by blow account) with Jason inside. But Jason is not so easily dispatched and walks from the burning rubble out onto the dock where supergirl Tina and the Rebel with a Heart of Gold are resting up. Jason tosses him aside-yet again-and Tina starts to panic…suddenly something bursts from the dock and grabs Jason. Apparently, nobody thought it was a good idea to removed the body of her dead father all those years ago, and he actually looks quite good. He wraps chains around Jason and pulls him into the deep. The firemen and paramedics come along and everyone is safe. I love a happy ending.

There is a lot of fun in the fact that Tina is able to fight Jason, and there is a nice juxtaposition with her powers being mind based and Jason being a pure physical force.  The special effects are quite strong for their time.  This is not terribly surprising since Director John Carl Beuchler came from an effects background.  This is one of the more energized films in the franchise.

This is Kane Hodder’s first time as Jason and he brings a lot of presence and physical character.  His run in the Franchise is one of the high points.

BTW, Seven is the first film where the titles do not literally explode onto the screen. 1-6 all featured the words “Friday the 13th” which were then obliterated by the subtitle flying up from behind.