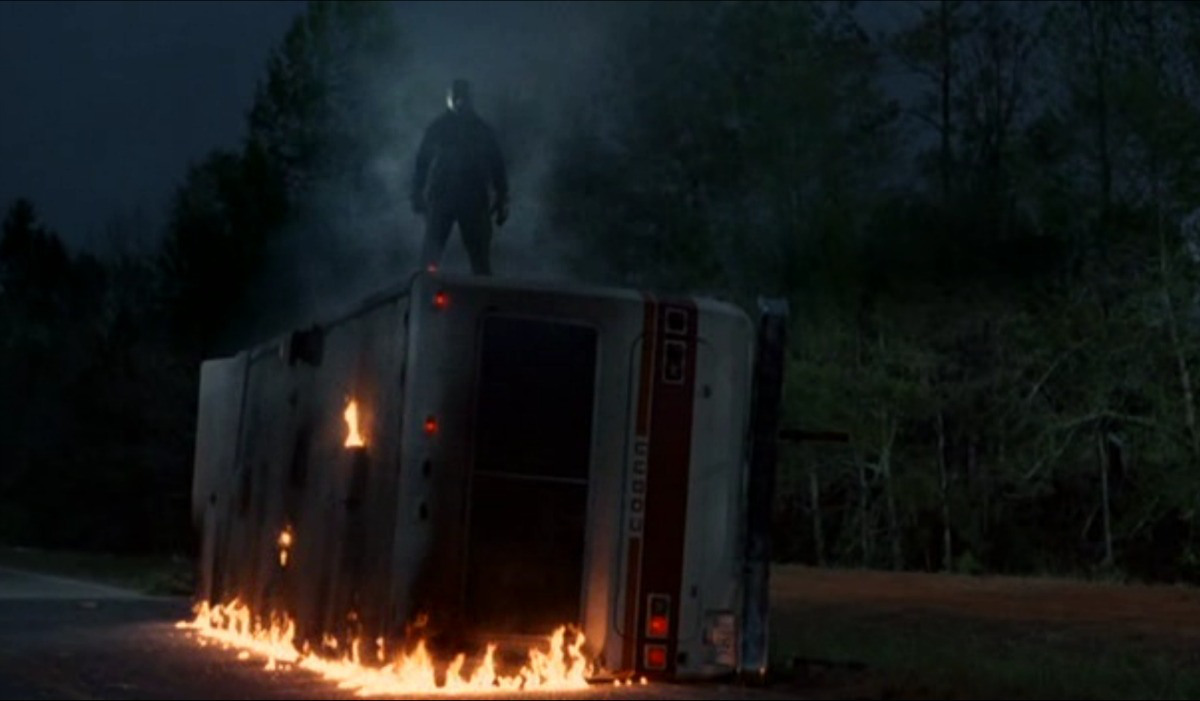 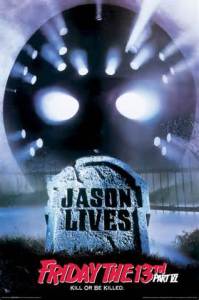 The new title is Jason Lives. Which is a bit of a misleading title. After all, I am not sure a walking corpse fits the definition of “living”. The story once again involves crazy Tommy Jarvis who is now a little talkier and tough than in # 5. And less homicidal. Apparently, he got the help he needed and did not become Jason II.  Really, six ignores five entirely.  For all intents and purposes, this Tommy is a completely new character.

Part six actually marks a turning point. This is when intentional humor started to be added to the series. It seems as though they knew they had milked the basic formula to death and had to alter it ever so slightly. It is the beginning of the “Let’s throw it at the wall and see what sticks” era.  And I think it helps make the later films more enjoyable.

The story begins with Crazy Tommy and his pal from the institution Arnold Horshack (yeah, from Welcome Back Cotter) speeding down a country road. Tommy needs to prove to himself that Jason is dead. So he goes to the cemetery. Jason has been given a real night plot of land. As they start to dig, the wind picks up. Tommy gets to the box that Jason is buried in. After prying it open, we find Jason is decomposing and near mummified. But still covered in maggots. That’s pretty good since he was in the ground for, what, ten years? Well, Tommy still can’t believe it, so he takes a metal post and stabs Jason with it repeatedly (all while a storm brews overhead). Tommy climbs out of the hole just as lightning strikes-TWICE- in the metal post lodged into Jason’s chest. Apparently, lightning can regenerate dried out eyes, because Jason starts scanning his location. Tommy jumps down and covers Jason in gasoline. As he jumps out of the Grave, Jason spryly jumps up and grabs him. As you can imagine, this freaks Horshack out. But he need not worry. Jason kills him quickly. Tommy runs away and Jason decides to go home.

Number six marks the first and last time the series returns to the camp counselors in danger motif. This time, however, the counselors live long enough for the kids to arrive. Tommy runs to the police to tell them that Jason lives. The police totally believe him and they hunt Jason down and trap him in the lake. Heh. Just kidding. The police never believe young people in movies. No they get mad at Tommy and threaten to kill him. But the police Chief’s hot blonde daughter (Jennifer Cooke in her last role according to the IMDB) thinks he might not be crazy. It’s to bad for her friends she can’t convince her dad. Jason starts killing all the counselors. It’s all pretty routine Jason stuff there.

Jason stalks and kills. One thing I have noticed about Crystal Lake…the doors on all the houses are not very strong. They routinely burst open from gusts of wind. And man, Crystal Lake is like, super prone to either heavy rains or super windy days. So Tommy and the Hot Blonde get out to the camp and find the empty squad cars. Jason has killed everyone but daddy the chief and the kids. The Chief has a bizarre confrontation with Jason. He shoots him with a big ass rifle. And it knocks Jason down. But he gets up again. The Chief shoots again, Jason gets knocked down, but gets up again. And another shot. Jason gets knocked down, but gets up again. Clearly, nothin’ is gonna keep him down. Jason starts walking toward the Chief who throws the big ass rifle away and opts for the far deadlier pistol he carries. Which does far less damage, but you never know. Jason breaks him in half. Yup. You heard me.

Jason finds the Hot Blonde and gets ready to use his patented “Head Crush Fatality” on her. But Tommy saves the day. He calls out to Jason, and Jason, like a homicidal puppy follows. Jason marches into the lake, disappearing into the depths. He leaps up onto the boat, they struggle and Tommy times a chain around Jason’s neck. Jason body slams the boat cracking it in half. He and Tommy sink to the bottom. Jason holds on to Tommy until he appears dead. Then he lets Tommy float to the surface.

The Hot Blonde is worried when she sees the lifeless body of Tommy bobbing on the surface. So she swins out to get him. Apparently the deepest Crystal Lake gets is about twelve feet, as Jason easily grabs her foot while he is chained to the bottom. She grabs at the motor of the boat Jason smashed, as it is one of those floating motors that will not sink if you drop it into the water. She grinds Jason’s mask and head up with the rotary blade and he lets go. She gets Tommy back to the shore, performs CPR-just like on Baywatch-and Tommy survives, everyone is happy. Cue Alice Cooper song and roll credits.

As noted, overall, it is pretty routine. However, director Tom Mcoughlin pulls off some generally nice and moody visuals. Such as a shot that follows a counselor walking through the girls cabin. Just out of her sight, following outside is Jason. And there are some genuinely funny jokes (one kid turns to another and asks “So what were you going to be when you grew up?”.

This is far more entertaining than the last, but still follows the main conventions of a Jason Movie.