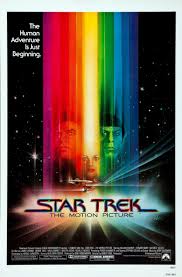 After the third season cancellation of the original Star Trek, Roddenberry tried to get various ideas off the ground, including a new Star Trek series. That idea morphed into the first Star Trek film.

Ten years later (give or take),  the five year mission is over, Kirk was promoted, Spock went off to find himself and Bones walked away from Star Fleet. Uhura, Sulu and Chekov are still serving on the Enterprise.

When a mysterious cloud starts attacking everything that it comes in contact with, Admiral Kirk takes command of the Enterprise once more with his crew and some new faces as they go to try and make contact with the mysterious entity known as V’Ger.

The first outing starts a long running love affair within Trek to explore the future of AI and the ethics that surround it. V’Ger is revealed to be in search of its creator to commune and learn.  The entity’s hostile acts are, in fact its attempts to communicate.

There are pretty much two big negatives for the film.  One?  The costume design is…terrible.  Going from vibrant colored shirts to lifeless white and gray aesthetics, this is not an improvement. The film also tends to move at a glacial pace. When faced with a bigger budget and the competition of Star Wars, the film makers focus on long lingering space exterior shots.

On the other hand, the film is remarkable in its beauty. Those exteriors are a wonder, especially later in the film when they are interacting with V’Ger’s environment. It is nice to see the crew together again, and while I think they have done this story better since, there is still a sense of wonder in the first Star Trek theatrical outing.