The Art of Gaslighting (The Invisible Man, 2020) 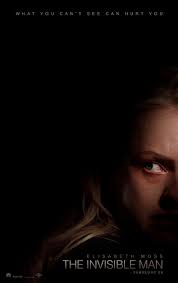 When the Tom Cruise update of the Mummy crumbled, so did the planned Dark Universe that Universal was placing hopes on. Instead, Universal penned a deal with low budget horror production studio Blumhouse.  They brought in director Leigh Whannell to make a lower budget re-imagination of the character.

Whannell moves the focus to Cecilia Kass who is trying to escape an abusive relationship with a famous optics tech scientist.  She tries to hide from him until she is informed that he has committed suicide. At first, things start to look up and improve…but suddenly, mysterious occurrences begin to occur that slowly cause Cecilia to unravel…she is convinced that her ex Adrian is still alive (the film does not hide this, both the trailers and film make it clear that Adrian is messing with Cecilia).  However, she cannot convince anyone of this.  Adrian starts to escalate things, severing her relationships and interfering with all attempts to move forward.

Moving the focus from a mad scientist to the victim of an obsessed stalker is highly effective.  Whannell constructs an incredibly intense opening sequence, with no effects beyond the use of sound and the motion of the camera.

The whole film uses angles, shots and general camera movement that causes you to distrust your eyes.  And it is incredibly impactful for the viewer as we search the screen for what is…wrong.

Moss gives a terrific performance.  We know she is not crazy, but her descent into obsession with proving Adrian is still alive is visceral and shocking.

I also really liked Aldus Hodge who is a police detective friend allowing Cecilia a home in which to stay.

The Invisible Man is an excellent thriller and I highly recommend it.