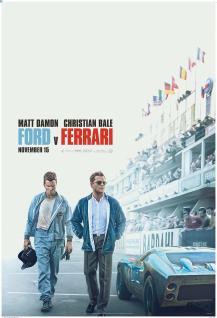 I confess…the subject of the film is not close to my heart. Cars are a utilitarian tool for me. So, I confess, the trailers did not excite me much. Damon and Bale are pretty proven variables…and Mangold has shown himself to be a skilled director.

Dramatizing the events of Ford’s attempts to beat Ferrari in racing and the team Ford assembled to pull it off, this got pitched as a dad movie.  Which, I mean, I guess dads will like it… but really it is a film that fans of creative innovations and risk will find appealing.

Forced to stop racing Carroll Shelby is recruited by Lee Iacocca (for Henry Ford II) to create a race car that can beat Ferrari in the 24 Hours of Le Mans. He reaches out to his friend, driver Ken Miles to help.  Reluctant at first, as he gave up racing to focuses on his life with his family, Miles becomes dedicated.  However, execs at Ford are not keen on having Ken as the driver, believing him too difficult.

The drama is terrific in the film, with the hard work, successes and disappointments as they fight to succeed against the odds. Damon and Bale have a very real connection as friends with a somewhat adversarial relationship.

There is some really solid cinematography on display here.  One of my favorite shots is Ken sits on the training track with his son as the night is falling. Just beautiful. I also thought the racing sequences were nicely played out.

Ford vs Ferrari is an engaging film worth watching, whether you are a dad or anyone else.