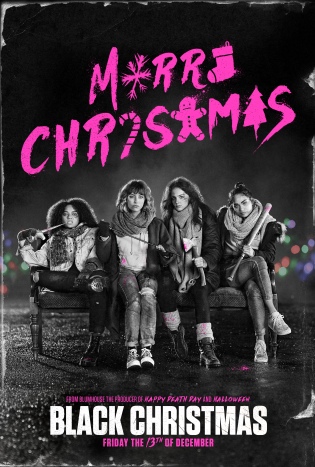 Welcome to Christmas time at Hawthorne College. As people are getting ready to leave for break, sorority girls are disappearing. Riley is in her senior year and trying to still come to terms with being raped by a popular frat boy years earlier. She came forward and was not believed.  Her best friend Kris is a crusading feminist, leading the cause to get the literature Professor fired.  This has the girls a bit on the outs with the male class.  It is made all the worse when at a party, the girls call out Riley’s rapist publicly.

The second remake of the Bob Clark classic avoids the biggest mistakes of the previous remake by really not being a remake at all. This is a new take with a different type of killer.

Other than a sorority and a college setting, there is little in common with Bob Clark’s original or the previous remake.  And there are some real positives.

I really enjoyed the chemistry of the leads.  I was able to buy their friendships.  There are some great visuals taking full advantage of the college’s architecture and setting. And the adding of the gender politics angle is not as obtrusive as some one think (the irony being the folks most offended by the film are already echoing the villains).  The film is pretty basic feminist theory, the kind that rankles guys like Stefan Molyneux. So, yeah, if you are set off by stuff like “the patriarchy” and references to “rape culture”?  I suppose that you might struggle with this film.

The biggest flaw is that male characters never feel fleshed out enough to make sense beyond their stereotypical frat boys.  The only exceptions are the boyfriend of sorority girl Marty, Nate and Landon… a polite love interest for Riley.  They are, throughout the film portrayed and decent guys.  Then there is Cary Elwes’ Professor Gelson.  He is a character that could have been a great bit of misdirection.  He is, after all, soft spoken and seemingly gentle. But the film also makes it clear from the start his bone to pick is related to the “Conflict of the Sexes”. And oddly, he just seems like such an empty character.

Overall, this is an okay slasher film. And if you are going to make more Black Christmas films? Maybe an anthology franchise of horror stories set at Christmas is the way to go. This is not a classic, (and face it, will be flattened by Jumanji the Next Level and Frozen 2) but it is a serviceable horror film.