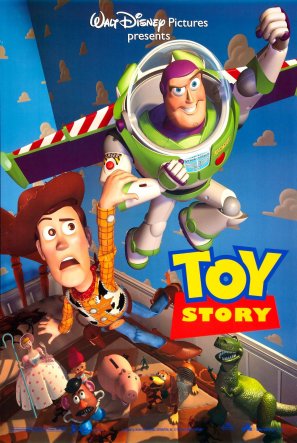 In the 80s Pixar’s team thought that computers could usher in a wave of new animation….animation by computer.  They made their name in the industry with the  short The Adventures of André and Wally B. A few years later it was followed up by the Tin Toy.

When it came to their first feature, the team at Pixar looked at their limitations and based the film in those parameters.  They chose to focus on characters that did not need to look “realistic”.  Toys are made of plastic and fabric.

The concept is that toys are living things that have a purpose…and that purpose is to be a friend to the child to which they belong. And in this case, it is the toys of a kid named Andy.

Life in Andy’s room is full of adventure.  Andy Imagines scenarios in which his toys, ranging from a slinky dog to a dinosaur to cowboy named Sheriff Woody.  Woody is Andy’s favorite and the “leader”.  But all that changes on Andy’s birthday when he receives the exciting new Buzz Lightyear action figure.  A futuristic action toy that can shoot lasers, Woody wonders if he has lost his place in Andy’s heart. The other toys are in awe of Buzz and this only compounds Woodys fears.

Jealous, he ends up alienating himself…and then when he accidentally causes Buzz to be lost, the other toys no longer trust him.  This forces Woody to go on a rescue mission, facing himself and also needing to consider the possibility that a change in status is not bad.

A lot of what sells this film is the performances.  Especially Hanks as the slightly uptight Woody and Tim Allen as the toy who does not realize he is a toy, Buzz Lightyear.

The movie has a ton of fun with the conceit of living toys.  Most of the toys are generic (outside of Mr. Potato Head and a couple much older toys) but this works pretty well.  It allows the voice talent and script to imbue the toys with some genuine personality.

Even now, the animation holds up.  Sure, compared to later films even within the franchise everything is much simpler to look at, lacking a lot of texture…and when we do see people’s faces…well, let’s just say they look like the 2019 Chucky.

But this is a film that manages to overcome those limitations with solid storytelling and performances.  There is both heart and humor that has made this film a classic of modern animation.