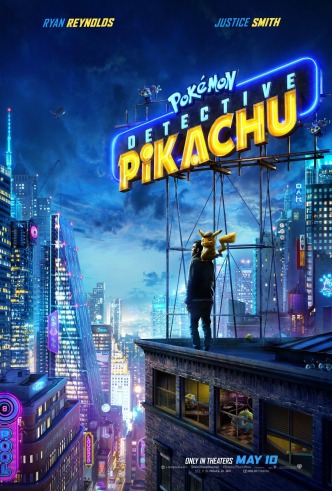 I will be honest…I went into this film knowing very little. Pokémon rose to prominence at a time where it passed me right by. So, I sat in the theater basically knowing that Pokémon are super powered animal things that people catch or somethings.

Justice Smith is Tim Goodman…a young man who once aspired to be a Pokémon Trainer, but after his mother dies and his relationship with his father fell apart, he never even took on a Pokémon partner.

After he is informed his father is dead, he finds his father’s Pikachu, who has amnesia, but is certain that Tim’s dad is alive.  Unexpectedly, Tim is able to speak with Pikachu (voiced by Ryan Reynolds). Reluctantly, the two try and determine what has happened to Tim’s dad.

This brings them into contact with Lucy, an aspiring reporter who is certain she is onto a dark secret involving Pokémon.

After the debacle involving Sonic the Hedgehog, it is interesting to see how successfully the filmmakers adapted the aesthetic of the cartoon designs to a live action setting.  The various Pokémon simultaneously are cartoonish, but feel very plausible in the world we are watching.

The humor is well played throughout the film, embracing the absurdity of it’s premise.  And there is a really good chemistry between Smith and Reynolds, they play off each other really well.

All in all, as someone that had no attachment to the Pokémon franchise, I had a lot of fun watching Pokémon Detective Pikachu.  It was goofy fun, And the reviews from my two nephews (six and eight) was that they loved it.