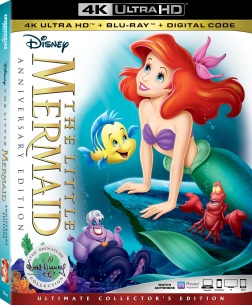 The Little Mermaid is famous for being the film that brought Disney back to prominence as the source of classic animation. With top notch animation and memorable songs, it really earned this reputation. Borrowing from Hans Christian Anderson’s fable, Disney worked its magic by ignoring, you know, the super depressing bits.

But the film’s visual flair, music and vocal performances are effective and charming. Ariel is a lovable lead, you really root for her. In part, Jodi Benson and completed by the fluid animation. The attention paid to Ariel’s body language and facial expressions make her a character the viewer cannot help but adore.

Of course, you cannot ignore one of Disney’s finest villains. Ursula (inspired by John Waters Muse Divine) is a visual treat. Instead of a fish’s tail, Ursula has an octopus body (which doubles as her dress). She is brash and revels in her wickedness in that way only certain villains cannot without losing the audience.

And Menken’s score  along with the songs he and Howard Ashman  wrote are infection.

Now, what does the new Signature 4k offer?  There are some new features, the most notable being Menken sitting down with five of the voice actresses from some of Disney’s biggest hits, including Ariel herself, Jodi Benson.  This is not greatly illuminating but it is pretty fun.

The set also imports all the special features from the Diamond edition several years back.

The audio is great, and I don’t have much to say beyond that.  The songs sound wonderful and unless you are just using your TV speakers, I did not notice anything that should trouble a viewer.

But what about the video?  I was a bit concerned because, as I understand things, Disney simply used the scan of the film from the previous blu-ray edition.  And at first, I felt like the 4K picture was not really any stronger than the blu-ray.  However, once you get to more colorful sequences, you start seeing the benefits of the High Dynamic Range.

Overall, if you have a 4k TV and player, I think this is a pretty worthy purchase. If this is a double dip, you may want to take that into account.  If you don’t care about the new features, then really, you should be fine with your prior blu-ray.  The 4k version is not so drastic that you are cheating yourself with the blu-ray.