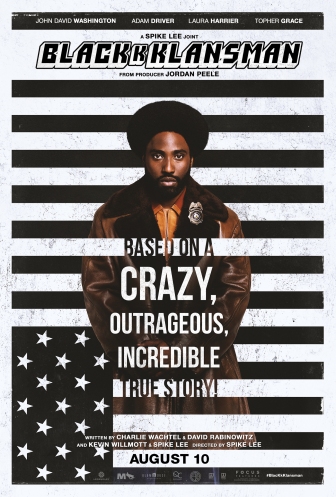 According to Jordan Peele, it took a bit of work to convince Spike Lee to take on the role of director for this film. Well, not to much… He sent Lee a copy of the memoir of Ron Stallworth, the Black Klansman.

It really is one of those stories that seems so insanely weird it almost cannot be true.  But Ron Stallworth is a real guy, the first black police officer in the Colorado Springs Police department. And in the 70’s, itching to advance his career and take down bad guys, he struck up a relationship with the local chapter of the KKK., eventually, this crawled up the ladder to include ongoing conversations with David Duke over the phone.

Of course, there was the little snag that Stallworth is a black man…and that might have stood out a little.  And so the dDepartment decides there is a worthwhile investigation here. So, a white officer, Flip Zimmerman, is recruited to play White Ron.

Lee sees how absurd and humorous this appears on the surface.  And he plays that up a lot. But Lee also saw something deeper at play…a notion that today, we are seeing some of the same evils bubbling to the surface in the present. And the film is not subtle about it.

John David Washington is terrific.  He is both real and performers.  What I mean is that his performance can be very personable and real, yet turn on a faithless charm when Ron is playing the Klan for fools. Adam Driver is more muted…there is no real over the top behavior called for here. Washington and Driver have a good chemistry as men who begin as simple co-workers, but develop a strong bond due to needing to…in a manner…share a life.

The supporting cast is excellent.  From Laura Harrier to Topher Grace, we get a certain tongue in cheek, but not mere cartoon characters.

Lee uses some real visual flair in the film, adding a bit of a larger than life feel in some scenes.  But never at the expense of storytelling.

The film certainly takes some liberties (for example, David Duke did not find out that Ron Stallworth was black until around 2013) and yet, it did not detract from the story overall. Flipp is not a Jewish man in real life, but it added a certain effective story point within the film and gave a bigger story arc for Zimmerman.

Admittedly, the film does seem play it safe.  There is only one racist cop, the rest are, at worst, race agnostic. So, the racism functions outside the institution. This has a side effect of making the black activists represented by Harrier’s Patrice Dumas as being to unfair in their perceptions of the law. It is one bad cop, not the whole department.

However, BlacKkKlansman is a very entertaining and thoughtful film, and its shortcomings do not prevent the film from having a real impact.