Nothing But Star Wars Episode Six (Star Wars: Return of the Jedi, 1983)

It took three agonizing years for the audience to get the answers to our questions.  Excitement built with the initial announcement of Revenge of the Jedi.  A bold and powerful title, it had fans eager. Before long, the title shifted to  Return of the Jedi.  Lucas noted that the Jedi do not deal in revenge.

And this seems a fair assessment for what little we really knew about the Jedi at this point. It did not matter though.  Return was a good enough title and certainly not something to dampen the fan excitement.

And so, here we go…as with the previous installments, we are going to spoil the heck out of this one.

Picking up some time after Empire (weeks? Months?  It is not entirely clear) we are introduced to Darth Vader arriving at a…half built Death Star.  Did not work the first time, but the Empire does not give up so easily.

Meanwhile, C-3PO and R2-D2 arrive at Jabba’s palace.  3PO notes a sense of dread as he points out that Lando never returned from his visit.  Upon gaining their audience with the immense slug-like creature, R2 plays a message which understandably freaks 3PO out, as Luke bargains for Han Solo and offers the droids as good will gifts. Jabba laughs this off, keeps the droids and starts up a party, complete with singers and a dancer.  Half way through, he pulls the dancer towards him aggressively, as soon as she is close, he drops her down a pit.  We don’t see what is down there, but it sounds pretty terrible.

3PO is now his translator, and that is good, because a bounty hunter shows up to claim a bounty on Chewbacca. After a tense negotiation, the party goes on and Chewie is led away.  We discover later the Bounty Hunter is Leia in disguise.  She frees Han from the Carbonite only for them to get caught. Han is jailed away, while Leia suffers a creepier situation…

Leia gets to be the sex object for a good chunk of the film.  While the films had not shied away from the notion that Leia is beautiful, this feels…a bit creepier.  The film implies some unsavory things for a film largely seen as a kids film. Granted, when I was eleven, all of it went over my head.  But still…anyways, Luke shows up and Jabba instantly tosses him into his death basement.  There, look has to outwit the Rancor, a large creature with a big appetite.  I suddenly find myself wondering just where Jabba got this thing.  Is it native to Tatooine?  Is it something Jabba imported? Like an exotic pet? Are there laws against importing Rancors?  Anyways, Luke kills it, angering Jabba, who decides to have Luke, Han and Chewbacca tossed into the Sarlaac Pit, where they will be digested for thousands of years.

No worries though, Luke has a plan. R2 has his lightsaber and shoots it to Luke from his barge. It turns out Lando is posing as a guard and Leia finally gets in on the action again and chokes Jabba with her chains.  This sequence has one of the original trilogy’s most infuriating moments for many fans.  Remember this guy? 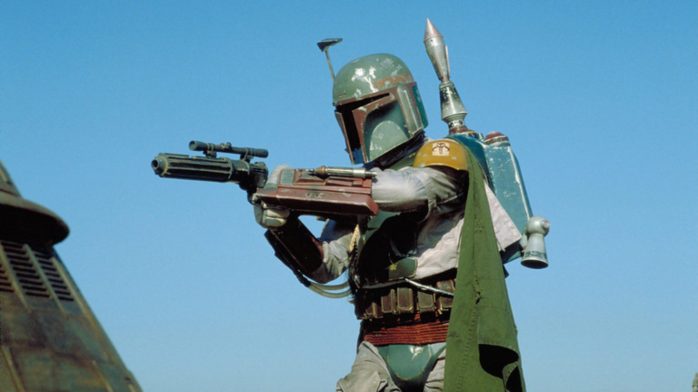 He is the bounty hunter who caught Han Solo because Darth Vader gave him Han encased in Carbonite.  And yet, somehow? The guy has a reputation as an intergalactic badass. Boba Fett does nothing on film to warrant this, but his rather embarrassing death (Han Solo accidentally sets off Fett’s jet pack, shooting him into the side of the barge and then on down the Sarlaac’s gullet.

This so bothered some people that in the comics being published at the time (by Marvel) had an issue that brought him back.  After laying waste to Jabba’s thugs, the heroes head off. 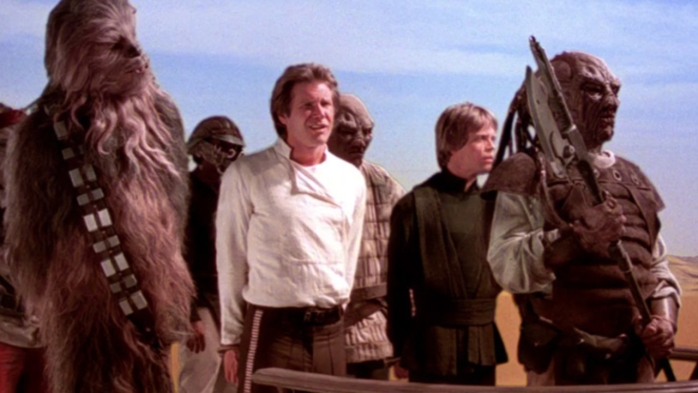 Luke Makes a stop on Dagobah where he finds Yoda near death.  Yoda confirms that Vader is indeed his father. After Yoda passes away, Obi Wan’s ghost visits.

Old Ben explains that really, when he said that Darth Vader killed Luke’s father, it was true…in a way.  It all depends on how you look at it. Of course, a person being corrupted is not actually the same thing as another person killing them.  And frankly, this should have been a hint for us all that maybe the Jedi were a bit ridiculous. In Empire, there was a reference made to their being another in an exchange between Ben and Yoda as look sped off for Bespin.  This becomes clarified to explain that Luke had a Twin sister, who he realizes is Leia.

Luke shows up at the rebel fleet just in time to join Han and Leia as they lead a team to take down the shield protecting the new Death Star that is powered on the forest moon of Endor.  Lando will lead the fleet in the assault on the Death Star itself, taking the Falcon with Han’s blessing…and a promise to not get a scratch on the ol’ ship.

On Endor, the rebels get help from the natives, little teddy bear creatures called Ewoks. They help Leia and Han make an assault on the base powering the shield.  Luke has gone to meet Darth Vader and is brought before the Emperor.  The hope of the Emperor is to win Luke over to the Dark Side.  He taunts Luke repeatedly trying to drive Luke into trying to kill him in anger.

Luke and the rebels are shocked to discover that the Death Star is fully operational, and Luke gives into his anger.  Vader protects the Emperor and they two duel. After near defeat, the rebels on Endor take out the shield and Lando’s forces are able to set off the chain reaction necessary to destroy the Death Star.

Before it reaches critical mass, Luke has almost defeated Vader, only to find himself halted seeing Vader’s mechanical hand, and looking to his own mechanical hand.

Just kidding. This is actually a good call back moment.  Luke sees that he is in some ways now like his father, and is shaken back to reality.  He tosses aside his lightsaber.  The Emperor uses his force lightning to kill Luke…as he is dying, Luke calls out to his father…And Vader picks up the Emperor and throws him down a shaft.

With his dying breathes, he asks Luke to remove that dark visage and allow him to look upon Luke with his own eyes. He asks Luke to let Leia know that Luke was right…that there had been some good in him after all.

On the moon of Endor there is celebration with a song containing the lyric Yub Yub.  Luke stands with his friends and then looks off and sees Anakin, Ben and Yoda smiling at him and the credits roll!

Jedi has always taken a lot of crap for the Ewoks.  It turns out they were originally supposed to be Wookies, but Lucas felt that Chewbacca had established that they were to technically minded. This does not make sense.  Chewbacca merely proves Wookies are adaptable and intelligent.  But while the Ewoks are a bit to cutesy at times, their inspirations are kind of interesting. Lucas had a fascination with how effective the Viet Cong was, in spite of their technological inferiority.  They knew their land and turned it into their strategy.

Return of the Jedi really cemented the myth that Lucas had this all planned out.  That he had this big screen play that he chopped into three parts. And it only got bigger from there.  Supposedly, this was actually a nine part series. But by the early 90’s Star Wars was mainly kept alive through the expanded universe of comics and novels. Every now and then there would be a story about Lucas and his massive epic…but it seemed pretty clear that we were never going to see more movies.

This allowed people to ignore those little leaks where people would point out that when they started filming Empire nobody knew Vader would be Luke’s father. Or that while the line about “there is another” did indeed refer to a sister for Luke, it was not Leia…they had no idea who or where the sister was.

Harrison Ford did return for Jedi, but he really felt that Han Solo should have died.  I kind of agree.  It would have been a tough pill to swallow, but it would have hit home that they were at war.  Not everyone gets that happy ending. But the film really does act like the story is over.  The Rebels win, Vader is redeemed and Jabba is a grease spot on the desert floor.

There have been rumblings of late from folks who feel the later films present the Jedi in a disparaging light, but I disagree.  This was always there.  We just wanted to ignore it for the legend.  Ben Kenobi deceives Luke throughout the series.  He does not want Luke to redeem Vader, he hides the  information thinking it will be easier for Luke to kill Vader. Empire and Jedi both call Ben’s wisdom into question, heavily.

With the impending prequel films, the Special Edition of Return of the Jedi was, again, largely cosmetic in it’s changes.  Some were more extreme than others.  For example, the Sarlaac Pit was not just a pit with tentacles.  Now it had an extendable beak or mouth or something.  But the largest change was in two sequences.  One was Jabba’s palace.  The musical number that proceeds the death of a slave girl was a pretty small affair.  Now there is a space rock number with dancers and a really articulate digital band. The song is…well, not really terrible, but certainly not going to find it in many folks digital playlists.

And then there is the final scene.  Instead of just showing us the celebration with the ewoks, we see various planets celebrating the end of the Empire.  And this:

This was before Attack of the Clones had cast it’s grown up Anakin. By the time the movies were released on blu-ray, we got this revision:

Anakin sure is looking creepy there.  This change creates un-necessary questions.  Why are Ben and Yoda Old? Why is Anakin looking younger? I suppose the argument is based on the idea that this was the last time from before he turned to the Dark Side…but that is kind of a silly and arbitrary choice.

So, of the original trilogy, this is the weakest entry, but it still is a lot of fun.  It has plenty of humor and excitement and really is an enjoyable watch.