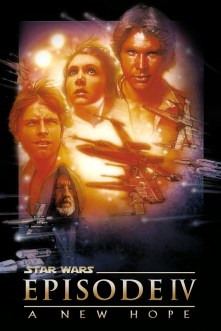 In the 70’s a young filmmaker convince a movie company called 20th Century Fox to let him make a film by pretty much forgoing massive creative fees and keeping the licensing, which he turned into a massive empire.  George Lucas had an idea for an epic space film.  Now, if you follow the “Official Story”, Lucas had a bible he stuck to.  He Cut the original film into parts and made the first part into Star Wars.

The truth is a bit murkier.  It is certainly plausible he had a larger epic ready…but it is pretty obvious that the story was evolving as he went along.  But I am getting way ahead of myself.  Originally just released as Star Wars, the film was later retitled as episode 4 and “A New Hope”.

Nothing But Spoilers ensue! 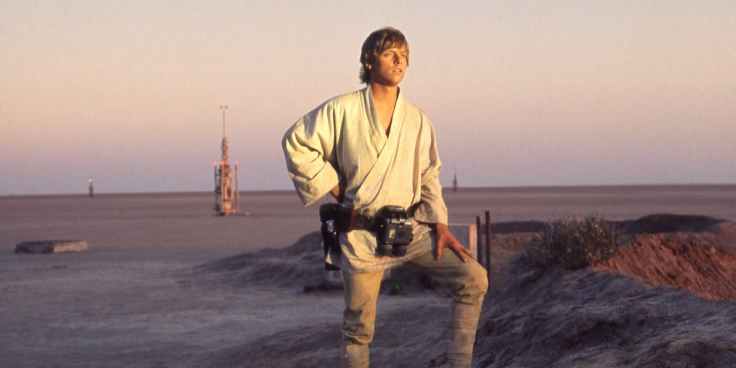 The film opened with the now iconic screen crawl telling us of the war between the cruel empire and scrappy rebellion.  We quickly are introduced to the villain Darth Vader.  Dressed in black with ominous breathing apparatus, Darth Vader intimidates the crap out of people with his super deep voice.

A young woman sends two droids on a mission, which leads them to a nearby desert planet.  There, the droids (named C-3PO and R2-D2) end up in the ownership of Lars Owen. R2-D2 is a spunky little droid who is actually trying to find a mysterious individual. This man is Obi Wan Kenobi, or as Luke Skywalker knows him, “Old Ben”.  Skywalker is Owen Lar’s nephew.  He is not content with being a farmer, he wants to join the rebellion.

Ben reveals he is a member of the order of Jedi.  Knights who defended the galaxy against darkness and protected the weak. They get help from hotshot smuggler Han Solo and his partner Chewbacca (a large alien covered in hair, looks kind of like a bi-pedal dog).  They save the Princess (well, sort of, as she ends up taking over the rescue) and the rebels lead an assault on the ultimate weapon…a planet killing space station called the Death Star.

And if that sounds like the most awesome thing in the world, five year me can assure that it most definitely was! But seriously, I saw A New Hope at five years old and it made a powerful impact on me.  Both in general of a love for movies and as a specific thing, Star Wars.  I wanted Star Wars clothes, I wanted the toys and Lucas got my parent’s hard earned cash.

But what did I love so much?

Was it how hard core science drove the images on the screen? Well, um, no.  The films are not seeking to be scientifically accurate.  The smaller spaceships fly like they are in World War 2 dog fights, there is sound in space and so on.  Star Wars wants to draw you in and does so with exciting visuals and sounds.

And the Star Wars films began a revolution in visual effects.  He used the existing technology and worked with  upstart creatives to make the technology that did not exist yet.  And while today computers and CGI rule the day, the practical model work of Star Wars holds up in the present.

The characters drive this film.  Luke Skywalker is one of those characters who works effectively as the audience proxy.  He is young and stuck in a life that is less than the one he desires.  He wants to break free.  He is also a bit whiny, but in a way that is probably more relatable than we want to admit.

Princess Leia is an inversion of the damsel in distress.  At first, it seems she is the woman who must be saved. But when Luke and Han Solo arrive, they muck up her rescue, requiring her to help get them out.  Leia is brash and tough, and a really great character. 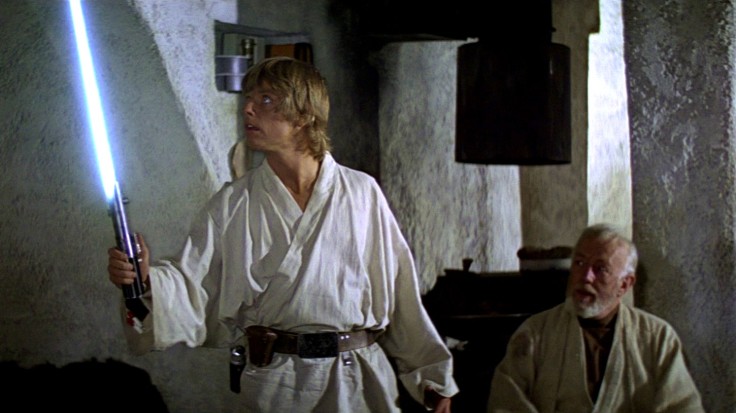 Ben Kenobi is the wise old knight.  He tells us tales of the Jedi as the most noble policemen in the galaxy before they were decimated by the evil Darth Vader. Vader killed Luke’s father, who was Kenobi’s friend.

And this first film establishes Vader as a cruel master of the Force, though working in the service of Gran Moff Tarkin. He is not really a sidekick, in spite of a comment from Princess Leia, the film clearly implies Tarkin and Vader have discussions about how to proceed with their policies.

The interesting choice Lucas makes though, is to frame the story not through Luke’s eyes.  Rather he does so through the two droids.  R2-D2 and C-3PO are thrown into the center of the war which, well, C-3PO is woefully not qualified for.  3PO is a fussy butler, a protocol droid.  He basically is a translator, his hands cannot even effectively hold weapons.  His companion, on the other hand, is a tough little fighter.  R2-D2 is an astro droid, essentially he is a co-pilot for smaller space ships and also maintenance for larger ships.  R2 speaks exclusively in beeps and squawks.  The film only gives us any kind of hint as to what he is saying through other characters.  Apparently, it is a commonly understood language, and everyone knows what R2 is saying, and so their responses are able to give the viewer context.

Meanwhile, there is Han Solo and Chewbacca.  Han is the adventurer Luke wants to believe he can be, but disappoints Luke because he is a craven mercenary.  Technically, he and Chewie are smugglers for the underworld of the Star Wars universe.  And Han has a price on his head, which may have made him an easier sell for Luke and Ben’s needs. Chewbacca is, like R2, a character who has no english dialog.  He howls and growls.  In this case, not everyone apparently speaks wookie, but Han clearly does and gives us insights into Chewie’s comments.  Between this, body language and the various inflections of Chewie’s growls, Chewie can be funny and sympathetic. In one scene, Han warns C-3PO against letting R2-D2 beat Chewbacca in a game. 3PO notes that nobody worries about upsetting droids.  Han notes Wookies are noted for…less than sportsmanlike responses to losing.  Chewie leans back and puts his hands proudly behind his head which really sells the joke in the scene. 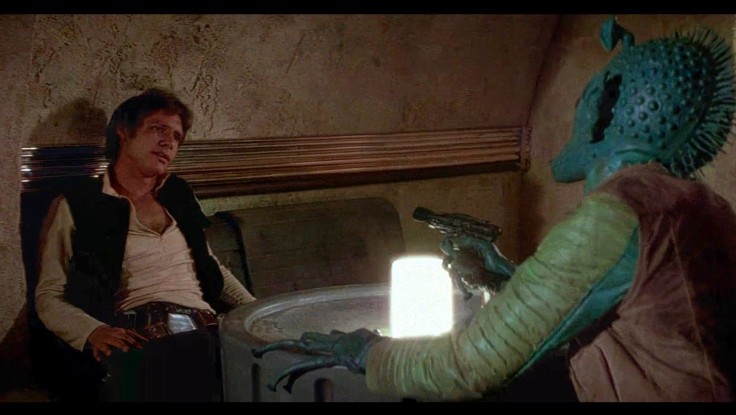 One of the defining moments for Han is when he is confronted by a bounty hunter named Greedo. Greedo tries to extort Han, but Han uses this to slowly get his gun, allowing him to fire on Greedo before Greedo can pull the trigger.  When we reach the end of the film, Han has gone from focusing only on his own survival to taking a risk for Luke and a cause bigger than himself or money. Sort of.

The thing to remember with Star Wars is that it has been an ongoing adventure in revisionism. Lucas initially made subtle changes to the film.  Calling it Episode 4, naming it a New Hope. But with the announcement of a planned new trilogy, Lucas saw another opportunity.  He would use modern technology to beef up his original trilogy of films. He had his teams clean up effects, enlarge the impact of other effects and expand the scope of the films.

Some of this involved making Mos Eisely look bigger and more populated.  Making some of the stiff creatures look more lively. making sure wheels were not visible beneath Luke’s landspeeder (kind of a hovering dune buggy) and so on. But Lucas also added scenes that had long been thought lost to time.

For instance, Han has a run in with Jabba the Hutt.  The sequence was filmed with a human actor and they intended to super-impose a stop motion creature over the actor. But they could never make it work.  So, by the time they reached Jedi, they got to totally come up with Jabba completely from scratch.  But now the technology made it possible to go back and re-examine the scene.  And so they got to work on creating a digital Jabba.  The results were…well…

Mixed.  It does not look awful, but it sure looks dated.  And the scene is solely interesting as an artifact of history.  As a story scene it adds nothing to the tale.  And not knowing who Jabba was or what he looks like built up his  threat across three films, and here, it kind of makes him seem…gentle.

Most of the additional stuff in the Special Editions does not bother me.  I am totally fine with seeing effects cleaned up.  But there is one intensely controversial change.  Even people who have not seen any Star Wars films are probably aware of the “Han Shot First” movement. In the remastered and expanded edition, Greedo gets a shot off before Han shoots him.  This of course, makes Han appear less cold blooded.  Sure, you could argue self defense before, but it definitely made Han seem like a sketchier dude, and increasing the power of his arc in the original.

This is certainly not enough to kill my love for the original film.  The good of Star Wars far outweighs the bad here.  The story is exciting, the characters engaging and the film has a killer musical score.  I feel like I should have mentioned that sooner.  John Williams defined movie music for much of the seventies, eighties, and nineties. And Star Wars was the Cornerstone of that.

The Star Wars story kicked off with a bang and still fills me with the same joy I felt as a kid watching it in 1977.