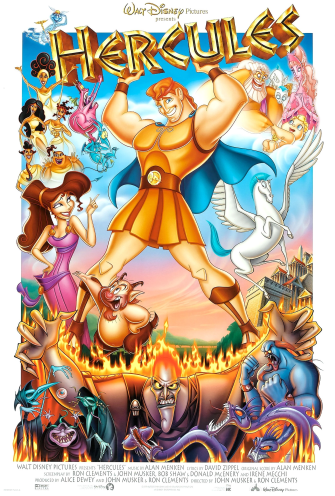 The gods of Olympus are celebrating the birth of the son of Zeus and Hera (um…slight change from myth, Disney cannot be seen as endorsing extramarital god flings) Hercules.  Everybody seems happy except brother Hades. Hades attempts to turn Hercules mortal…but is only half successful, forcing Zeus to allow his son to be raised on earth by a poor couple of peasants. Hades is unaware that his plan was unsuccessful, mislead by his minions Pain and Panic, and believes Hercules is dead.

But years later, Hercules is a clumsy young man, who seems to cause trouble anywhere he goes, due to not being able to properly judge his own strength. He seeks the help of satyr Phil to train to become a true hero. Along the way he falls for “bad girl” Meg, who turns out to be a pawn of Hades. He is shocked to discover that Hercules is alive and sets out to get rid of Hercules and Zeus at the same time.

Frankly, James Woods is the best thing here. His Hades is a darkly comic jerk who is quite  bit of fun. The films tone and honor are kind of all over the place, and not particular effective (especially the whole mocking of “branding”, which rings kind of hollow as critical humor goes).

I really like the character design of the film.  The art style is unique from previous Disney animated features. Ultimately, we are left with a light film that is kind of a mess in it’s execution.

It is not something I plan to do often, but this essay from Lindsey Ellis on the film hits pretty much everything I like and dislike about the film.  And is more entertaining than my ramblings.