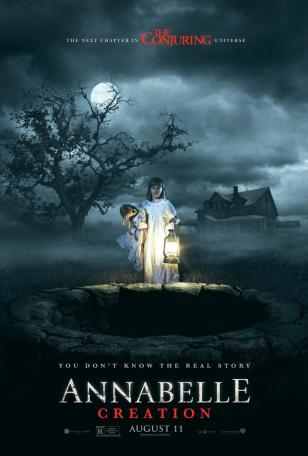 Opening in 1943, we meet Doll maker Samuel Mullins and his wife Esther.  They adore their young daughter Bee.  When she is killed in a tragic accident they are broken hearted.  The film jumps ahead twelve years and the Mullins have opened their home up to a Nun and several orphan girls.  Samuel still seems a broken man, and explains his wife is unable to get around much, due to an accident years before.  There is one rule given by Samuel, to avoid a certain room.

But curiosity gets the best of young Janice, who opens the door to discover a doll sitting in a chair. This soon results in all sorts of strange events, sitings and soon Janice claims to be seeing the ghost of Bee.  Things escalate into a frightening fight for survival by the young girls and their nun.

Annabelle: Creation is a marked improvement for this part of the Conjuring Universe.  The rural setting creates an eerie sense of isolation that has a lot of impact.  There are plenty of jumps and legit scares in the film.  The demon tied to the doll is a classic demon you might see in a cathedral painting, which is fitting with the Christianity themed spirituality.  The Mullins are a tragic couple who we discover were so overcome in their grief, they allowed darker spiritual forces into their home and paid a terrifying price.