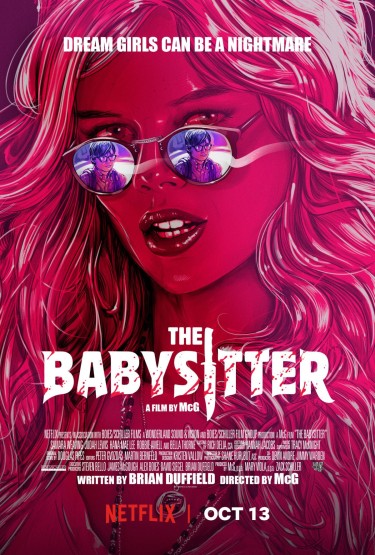 Cole is in Junior High. Almost everyone picks on him and seem determined to make his life hell.  His two lights in the darkness? His friend Melanie and his Babysitter.  Bee is the toughest, funniest, sexiest and all around coolest girl in school.  She also stands up for Cole and is able to interact with him on his geeky level.

One night, he sneaks out of his room to spy on Bee and her friends.  Except what he thinks is some exciting fun turns out to be murder and satanic rituals.  Bee and her friends sacrifice another young man.  When they realize Cole knows what they have done, it becomes a battle for survival.

At no point is the film scary, with a heavier focus on humor and action.  The film does a great job of playing up why Cole is into Bee.  She never seems deceitful, and Samara Weaving comes across as both likable and attractive.  The film definitely plays up some of it’s campier elements (the deaths are over the top).

The Babysitter is an entertaining horror comedy in the vein of Tucker and Dale vs Evil.  It stays focused on the goofiness of it’s concept (never succumbing to pretentious ideas that it is more meaningful than it is).