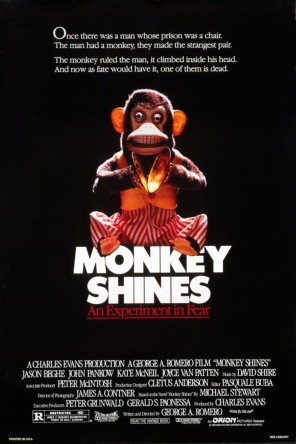 Based on a novel by Michael Stewart, Monkey Shines is the tale of a quadriplegic man who given an enhanced monkey as his helper.  Allen is an athlete who is left wheelchair-bound after a terrible accident.  Initially, he is stuck with a rather unsympathetic nurse (who lets her parakeet fly around the house) named Maryanne.  He struggles, and his girlfriend walks out on him (only to start dating the doctor who saved his life).  His friend Jeffrey (a scientist experimenting with capuchin monkeys) and a trainer, Melanie, introduce him to Ella.  A capuchin meant to perform tasks for Allan, she initially shows a great amount of intuitiveness, selecting music Allan would like to listen to.  As time goes on, Allan and Melanie also start to build a romantic relationship, while he and Ella seem  to be developing a deeper bond.

But as the story progresses, the bond seems to become more and more primal, thus more dangerous.  Allen has visions of running around, at about the height of a monkey.  As he gets agitated, so does Ella.  And he starts talking about he and Ella as “We”.

While the film starts out shaky, with the initial accident looking almost comical, Romero quickly finds footing in Allen’s struggle with his new situation.  The slow changes from where we see his temper growing shorter and shorter, combined with his growing paranoia over his connection to Ella is very effective.  This is especially seen in his relationship with Maryanne, which rapidly deteriorates with the addition of Ella to the house.

Monkey Shines is a compelling thriller that should really be remembered more as one of Romero’s film canon.