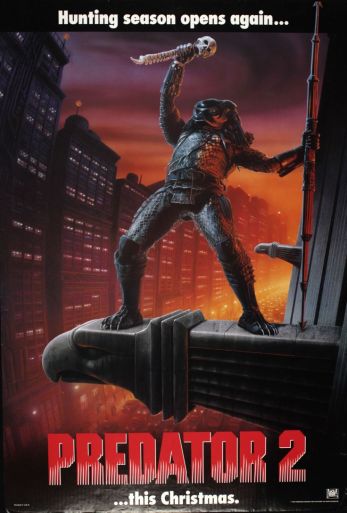 Directed by Stephen Hopkins (Lost In Space, Nightmare on Elm Street 5 and Race), Predator 2 is an attempt at being very different.  Instead of a jungle, we are in “the Concrete Jungle”.  Instead of a heavily muscled soldier, we have have a team of police.  The film tries to be different by being very opposite.  There are vicious gang wars that are tearing up the street.  Captain Mike Harrigan (Danny Glover) and his team are the cops on the front line.  They start to find dead and mutilated gang members.  Soon the cops find themselves as much targets as the gang members.

This sort of works well, and the film acknowledges the first film with Gary Busey as head of a task force trying to capture the Predator explaining it all to Harrigan.  The film also establishes what draws a Predator to a location.  Extremely hot weather in volatile areas.  It also expands the previous film’s rule that Predators do not hunt and kill the unarmed to not killing pregnant women (even if they are armed).

Predator 2 is competently made, but Hopkins is not as strong as McTiernan.  It has it’s charms (such as a very late 80’s action cast including Bill Paxton, Maria Conchito Alonzo, Robert Davi and Ruben Blades) but does not rise to the entertaining levels of it’s predecessor.

There is a throw away moment towards the end where Glover’s Harrigan is on the Predator ship and looking at the trophies on a wall…one is clearly a xenomorph skull from the Alien films.  Although just a “wouldn’t this be fun” gag, it set fire in the imaginations of fan who soon wanted a crossover between the franchise.  For a long time, this only occurred in the comics.  It took fourteen years (seven from Alien Resurrection) to get to the Alien vs Predator films.