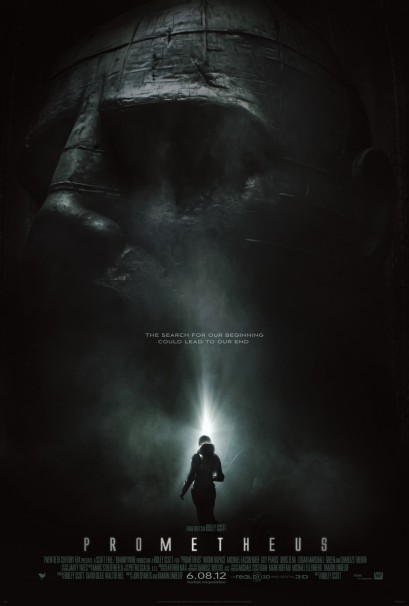 Resurrection seemed to kill the franchise.  But after two Alien vs Predator films, Ridley Scott became very annoyed and wanted to right the ship.  Kind of.  The vaguely titled Prometheus would be set before Alien, but it was not a direct prequel.  Rather, it would be Alien Adjacent.  This certainly made for an intriguing idea, and trailers showed a lot of hints of the unfamiliar future with brief glimpses of familiar sites.

The final product is an imperfect attempt at an epic tale.  Borrowing heavily from Erich Von Daniken’s Chariots of the Gods, Prometheus opens with a gorgeous and vast shot of lakes and mountains.  We travel along this landscape until we come upon a “man”.  He is tall and muscular, with marble like skin.  A large spaceship (which is the same type of ship from the first Alien where the eggs are discovered) is leaving him behind.  He drinks a strange black drink and instantly his body starts to break down and he falls into the water, his DNA dispersing.

If you are not sure what Chariots of the Gods is, it was a book in the 70’s that claimed that all religion and technology we know today was the result of guidance from extra-terrestrials who were revered as Gods.  Prometheus takes this a step further, positing that mankind was created by these aliens.  They become known as “the Engineers” in the film.  Considering that Scott completely ignores the Alien vs Predator films, I am surprised he pretty much steals this concept from them.

The film leaps to the future, where we meet Elizabeth Shaw and her fellow archeologist (and boyfriend) Charlie.  They have been traversing the globe comparing various ancient sites, specifically the artwork of cultures from all over the world that share common themes.  They believe they have assembled the coordinates to a home world of “The Engineers”.  A crew is assembled by dying Peter Weyland to visit the planet.  They are told he will be dead by the time they arrive.

Once on the planet, the crew discovers an ancient ship with bodies of the engineers and holograms of them running from some threat.  Many poor choices are made and everything goes wrong.

The film gives us all sorts of “almosts”.  Almost a facehugger.  Almost an Alien. Almost the planet from Alien.  The film has grand attempts to explore themes of faith, diety, humanity and creation.  A lot of this focus is on Shaw and the Synthetic David.  David is one of the more interesting characters…he is also both sympathetic and disturbing.

The ending is a massive storm of confusion and destruction, in which Shaw becomes determined to discover why the Engineers have chosen the course they chose in relation to humanity.

Prometheus is gorgeous to watch, which breath taking visuals.  It is a stunning and spectacular feats with a strong cast, including Noomi Rapace, Charlize Theron, Idris Elba and Michael Fassbender.  Fassbender especially shines as synthetic David.

But the story seems only half cooked.  They have ideas at play that never meet fruition.  The unanswered questions seem allowable, as the film was clearly left open for a follow-up.  With Prometheus, we have a film that is not terrible but not quite great.  And if it was part one, it might even be a great start and set up.  But, that was not not meant to be.  Instead we are left with an incomplete story.