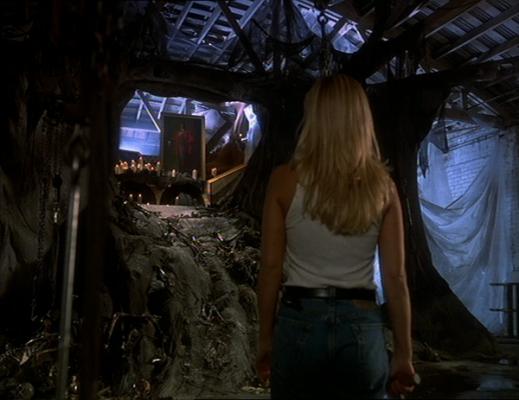 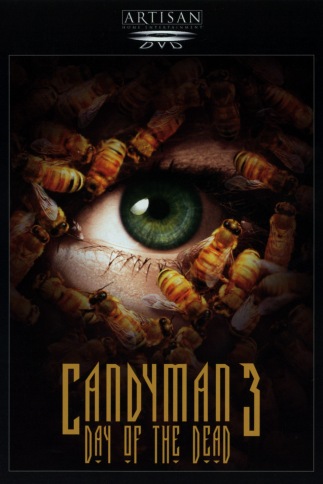 Candyman picks up a couple of decades after the second film, where we meet Annie’s grown daughter Caroline (Baywatch actress Donna D’Errico) living in Los Angeles.  She is running an art gallery and allowing her friend to do a theme around her great, great grandfather.  She is frustrated that he chooses to focus on the legend of Candyman.

During the show, Caroline calls out to Candyman Five times, apparently, causing him to return into the picture.  She starts seeing visions of him, and he tells her she must believe.  While upset with her friend, she decides to visit him…inter-cut with her entering his apartment are visions of Candyman killing him and his girlfriend.

And so, Candyman starts offing Caroline’s friends, causing her to look like the prime suspect.  This has been an ongoing theme in the films, people keep suspecting the lead woman.  And it does not help matters that Candyman kills one of the cops.

All the films are kind of vague on Candyman’s rules.  While he has to be called by saying his name five times while looking in a mirror, he seems to get around and kill a lot of people who never called his name.  The film also establishes things like…bees can smash through windows.

The film reminds us of the backstory…with flashbacks that are in contradiction to the flashbacks of the previous film’s flashbacks.  In Farewell to the Flesh, he is stripped of his shirt, in this film he is fully clothed.  More noticeable, in the last film it all occurs in daylight, here he is killed at night.  The brief shots here have less of an impact than the ones created for Farewell to the Flesh.

This is not a particularly good film.  The script has D’Errico spending a tremendous (and ridiculous) amount of time screaming. And most of the acting is not particularly good, save for Tony Todd (as is expected).  In fact, the thing that really hurts this film is that anytime Tony Todd is not on the screen?  The film gets incredibly boring.

Not remotely entertaining, it is no surprise this film killed the franchise.