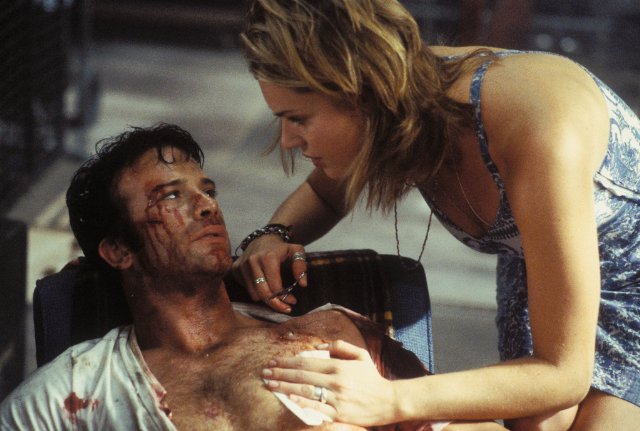 There is a lot to like…and yeeet…

Created in the early 1970’s by Gerry Conway, John Romita Sr. and Ross Andru, he debuted in Amazing Spider-man # 129,  the first attempt at the Punisher was in the 80’s.  It starred Dolph Lundgren.  At the time the casting seemed like an obvious choice.  But then the movie came out.  It was really more like they had a Dolph Lundgren action movie and decided they should market it as the Punisher because…hey, why not?  He did not even have the skull as part of his outfit.

The Punisher was enjoying a resurgence thanks to the immensely popular series being handled by Garth Ennis.  Ennis brought a wicked sense of humor to the character combined with an over the top approach to the violence (certainly not a new formula for Ennis, but rather his stock and trade).

Certainly, the Punisher seems like an obvious character to adapt.  He is not special effects intensive and his costume is not that complex.  To accommodate the age of the actor (Thomas Jane) they opted to make him an Iraq War vet who is now in the FBI.  After a drug bust results in the death of drug lord Howard Saint’s (John Travolta) youngest son, Frank Castle finds his entire family dead.  In the comics, it is his wife and kids…in the film?  It’s at a family reunion.  So, like, the entire extended family is slaughtered.  Talk about raising the stakes.

Frank survives the attack, because boy would this be a short movie if he died… and goes out for revenge.  Frank hides out in a shabby apartment complex that also is inhabited by Joan the Mouse (Rebecca Romijn), Spacker Dave (Ben Foster) and Bumpo (John Pinette).  Joan is a nervous woman, hassled by an abusive boyfriend, while Bumpo is an overweight guy with a grand love of cooking.  Spacker Dave is just kind of a strange dude.  They are curious about their new occupant, who never seems to interact with them.

Frank has converted his apartment to an armory.  He kidnaps low-level employee of Howard Saint Mickey (Eddie Jemison).   In an odd torture sequence (done more to show how clever the Punisher is-as he never actually hurts Mickey) he coerces Mickey to be his eyes and ears and his informant.

Castle works his way through Saint’s men working up to Saint himself.  In the end, the Punisher leaves Joan, Spacker Dave and Bumpo behind (but leaves them a little gift) and gets ready for the Punisher 2.

I said there is a lot to like.  For one thing, the film has a terrific cast.  Jane is a credible Frank Castle and is able to make the character dark and brooding-while finding the humor.  Frank doesn’t crack jokes, but his actions can border on the comical.  During his torture of Mickey, he explains how a blowtorch flame is so hot, it feels cold as it cooks the skin… he then presses a popsicle to the sufficiently freaked out Mickey’s back.  When the session is done, he shoves the popsicle in Mickey’s mouth (causing Mickey to realize he was played).  The fight with the Russian follows the comic closely, with Frank taking a beating while his neighbor obliviously prepare a meal.

The film touches on the quirkiness in the Ennis Punisher run.  The inclusion of Joan, Spacker Dave and Bumpo was good, as it gives the Punisher some human interaction that is not fighting or killing.  The Punisher is a smart and clever man in the film, which is an important aspect of the character.

Romaijn is kind of odd choice for Joan.  In the comic, Joan is pretty plain… Romaijn is/was a Super model.  They end up making her Hollywood Plain.  She does a good enough job…but still…

The flaw of the film is Howard Saint.  Not because Travolta is bad in the role.  He chews the scenery in an entertaining way.  But he really is “generic mob villain.”  Welcome Back Frank (the clear inspiration for much of the film) featured a memorable mobster in Ma Gnucci and her sons… Ma survives an attack from the Punisher and is just as dangerous with no arms or legs.

To include over the top stuff like the Russian (Kevin Nash) and Harry Heck (country singer Mark Collie-the character is the answer to “What if Johnny Cash was a mob assassin?”) but then not go as over the top with the main villain?  It just keeps the film from being as good as it could have been.  The issue with the Russian is that he is silent.  In the comics he is ridiculously talkative.  Plus, they never use Detective Soap from the comics, who played for strong comic relief throughout Ennis’ run.

And in the comics, the Punisher punches a bear.  Why wasn’t that in this film?!