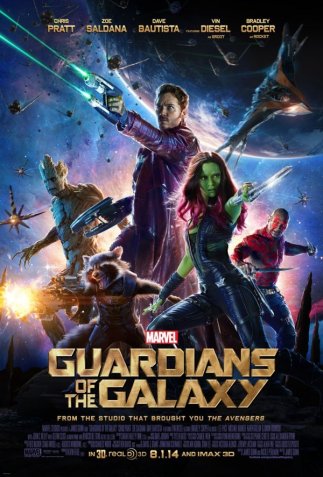 When Marvel announced Guardians of the Galaxy, it was met with a pretty collective “huh?”  The announcement of director James Gunn was not much help.  Gunn had directed 2 films prior.  The Sci-Fi comedy Slither and the dark super-hero satire Super.  His writing credits were a bit more substantial.  While comic fans knew who the Guardians of the Galaxy were, the masses did not.  And this did not bode well for early anticipation.

And yet…James Gunn managed to deliver one of Marvel’s best films to date.  A traditional “Mismatched Crew Saves the Day” tale, the writing and performances make the most of the weirdness to carve a very fun film.

The film opens with young Peter Quill at the bedside of his dying mother.  When he runs off, he is abducted by aliens.  Because in Marvel’s world, that is just the kind of stuff that happens.  After a heavy-hearted beginning, we are introduced to grown up Quill.  In what seems like a serious sci-fi moment, Quill walks the landscape of a dead planet.  He pauses and puts on earphones and the booming sound of Come and Get Your Love.  This sets up a tone for the film that is highly effective.

We learn that Quill is not the brightest and gets by on luck.  As he tries to pawn off the magical McGuffin he steals from an old temple, he finds himself dealing with the green skinned Gamora who is after the McGuffin.  At the same time, Rocket (a talking raccoon) and Groot (a talking tree) are bounty hunters pursuing Quill.  This leads to all of them being imprisoned.  They are forced into a team, getting a late addition of Drax (Also green skinned and also tattooed).  Drax wants to kill Gamora, because she is an associate of the mad Kree Warrior and religious zealot Ronan.  Ronan killed Drax’s family and he is seeking his vengeance. Quill talks the other four into a prison escape, as Gamora knows someone who is interested in the McGuffin.

The prison escape is both action packed and highly entertaining.  Gunn keeps everything moving, and even when the film slows down?  It has momentum.  Gunn makes sure not to ignore the development of the Guardians.  They have opportunities to grow and Gunn (along with initial screen writer Nicole Pearlman) and overcome their situations.  Vin Diesel has one line, yet manages to imbue different emotions every time he says it.  When Drax discovers that Ronan does not appear to remember him or his family…he is lost and beaten.  He was entirely of no consequence to Ronan.  It causes him to alter his perspective.  He also starts to get the value of his friends.  Even if he does not understand how to talk to them.

The film focuses on the Guardians as David’s to Ronan’s Goliath, and it really works.  The cast is effective,  Probably the biggest flaw of the film is Ronan.  This has not been uncommon, a lot of the Marvel Cinematic Universe films seem to be thin on their villains (usually expecting to be overcome by good casting).  Otherwise the film is full of humor and excitement.  Gunn took an unknown group of characters and made a strong tale of friendship and misfits overcoming adversity.