Taking Our Planet Back (Independence Day, 1996) 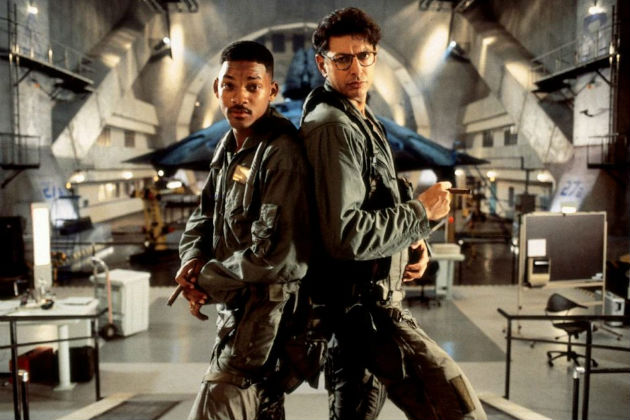 24 Year old Me Reviews Independence Day: OMG!  That was awesome!  Cool Effects, funny quips.  Will Smith and Jeff Goldblum was great!  Bill Pullman plays the Version of a Democratic President Dean Devlina and Roland Emmerich wish Clinton was!  Cool movie!  Everyone should see it.

20 Years Later Me Reviews Independence Day:  Ehhhhhhh…this is a pretty dumb flick.  But in a weird way?  That is part of it’s charm.  Will Smith plays his standard Cocky Hero Guy, Jeff Goldblum is his standard nervous idealist guy, Bill Pullman is THE PRESIDENT, Randy Quaid is a version of his Uncle Eddie character (a version more deeply consumed by alcoholism), Mary McDonnell is the woman who must die to give Bill Pullman resolve (er, the First Lady) and Judd Hirsch plays Old Jewish Stereotype.

Visually, this film holds up pretty well.  Considering it relies on practical effects as digital (as Digital Effects were still in their infancy) the destruction still looks convincing.  The dogfights hold up and the aliens look quite good.

The writing is broad in the film.  Folks speak in quips and dramatic phrases.    Sometimes, as with Goldblum and Smith, this is effective.  They carry the burden of most of the humor, Though Brent Spiner (Star Trek’s Data) shows up briefly to play an amusing and socially awkward Area 51 Scientist.  Pullman plays earnest and plays it well.  There is a speech in the film that could have gone off the rails, but his delivery makes it seem better than it is.

Of course, the “Rah Rah America” gets overbearingly embarrassing.  The whole world was apparently sitting around waiting on America to come up with a plan to fight back against the aliens.  There is a moment where a British guy tells another soldier that the Americans have a plan and he pretty much says “It’s about time”.  The inspirational message to the world in the film? We are all America.

The overall cheesiness and goofy nature of the film does work to the film’s favor and it is the times when it takes itself to seriously that it feels like it will fall apart.  And even 20 years later it can be fun to watch, especially for the visual effects and the main performances.  And no matter who is in office, there are always going to be people happy to see the White House blown to bits.