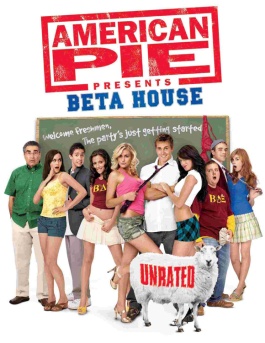 This continues the story of Erik Stifler.  And the Stifler-centric nature of things continues to not favor the franchise.  This film hammers home what crappy people the Stifler Family Tree is…it appears almost every branch is rotten.  Erik’s biggest struggle in life is not living up to the Stifler name.  He is not good at partying or getting laid.  Early in the film, his father (Christopher McDonald) provides a list of all the women he has had sex with.  Erik is startled to see the list does not end with his mom.  Cause nothing is good for a laugh like implying he is a terrible husband.  Erik’s friend even notices his mom’s name is on the list.  The Stiflers are terrible people.  Why does Erik want to measure up to that?  But he has no girlfriend now, so he can have a romantic interest at college in his co-ed dorms.

He joins his cousin Dwight in the Beta House and this is where the real sto-oh who am I kidding.  There is no “Real Story”.  It is just more cheap excuses for nudity, because that is all that happens at frat houses according to movies.

The loose plot is how the Beta House Frat Bros are being threatened by the powerful Nerds on campus.  Seriously.

The film lacks any strong jokes, and at this point, I am embarrassed for Eugene Levy, and Mr. Levenstein’s strongest traits are missing entirely from the film. The film simply recycles gags from a variety of frat movie stereotypes, and reversing the Revenge of the Nerds dynamic is not creative enough to make  the story remotely fresh.

Again, the same criticisms of Naked Mile appear here.  It has the same problematic treatment of it’s female characters.  They are empty and are used primarily for titillation.  The guys only fare slightly better in that they are absurd stereotypes of college guys.